In this post I’ll talk a bit about my thoughts after finishing the full version of Cinders. Please read my review of the demo first (if you haven’t already): [review] Cinders (demo). Spoiler tags will be used where necessary.

The first thing that surprised me was how short Cinders really is. It’s currently tagged on vndb as "10-30 hours" and the script is supposedly over 150k words long. I managed to get all four endings in under 6 hours, while reading attentively, taking screenshots for my review and including the hour it took me skipping through previously read text searching for the last ending. I suppose I’m missing possibly several hours worth of casual banter that changes based on your relations and choices, but almost none of it is plot-related and it’s not really worth the tedium of looking for.

Notice how I talk about endings and not routes in the previous paragraph. Cinders doesn’t really have any routes — there’s only about 10 minutes worth of unique content per ending. The first ending will take you a good 4-5 hours to read through, but the other endings only branch out the tiniest bit right at the end. Which ending you get is actually determined by a single choice: 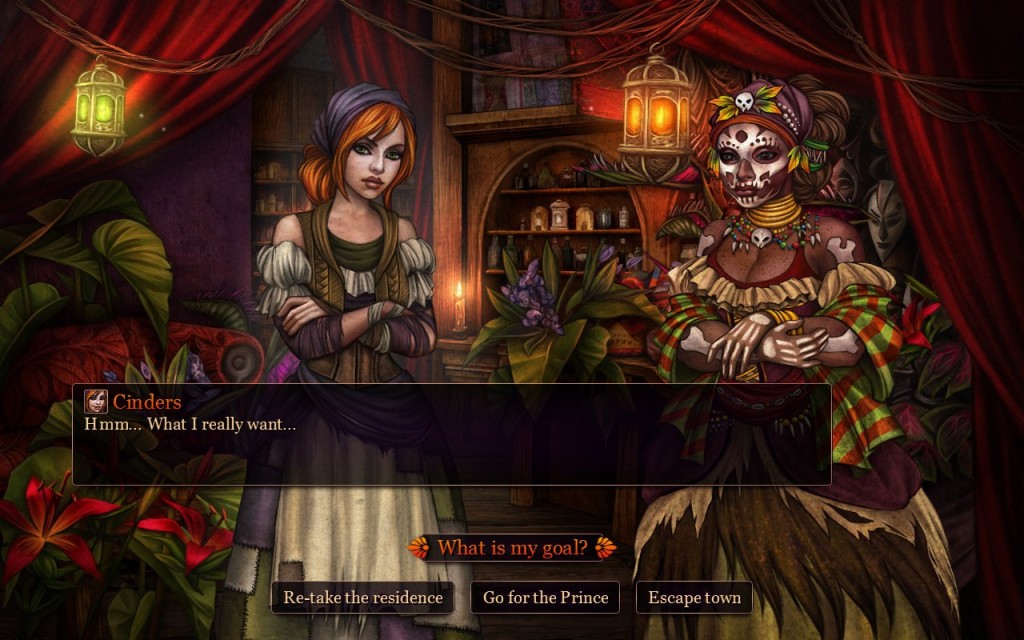 How to get each ending:

The personality and relations you’ve developed over the course of the story merely change the variant of the ending. Being stupid makes you a bad ruler, having a bad relationship with your family causes you to lose contact, etc. One or two lines change — enough to make your decisions feel acknowledged, but not enough for me to actively search out every possibility.

You may be under the impression that the choice of advisor, Fairy or Madame Ghede, is an important one. It isn’t, it pretty much just changes your dress and the scene you get it in. Oh, and a scene of ‘Shady Character’ (why does he not get a name?) lecturing your advisor of choice (makes about as much sense as it sounds like).

Mainly, I’m just surprised at how linear Cinders is.