WTF are you doing? Even in the extremely remote chance you’ll actually finish it, how long do you expect to take?

Hai gaiz imma writin a vn wit ma friends and the plot is finished we just need 4 artists, 2 programmers, a composer and three writers. Who the fuck are you and why should I care? Don’t expect people to join your project without any creative input, and especially not if you’re some faceless scrub on the internet who has never created anything before.

Sabotaging the engine to make it ‘harder’

Be it disabling saving, or limiting/disabling rollback in the case of Ren’Py. Are you being an asshole to your players/readers on purpose? I don’t really see the benefit in trying to piss them off. It’s especially hilarious when rollback is broken so it doesn’t roll back part choices, yet the save system is left untouched. What’s the point then if you can still do the exact same thing (change your choice), just in a lightly more involved way?

Making a visual novel ‘hard’ in the first place

Why? Just why? And even if you do decide to be a silly, silly man and make a ‘hard’ visual novel how do you plan to do so? Any attempts I’ve seen just lead to completely arbitrary winning conditions. Protip: it’s not a game if you don’t explain the rules. Trial and error: fuck you.

Using the Ren’Py default save screen 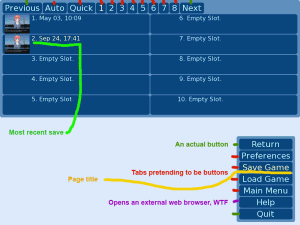 Not only is the actually useful content smushed into the top half of the screen for no reason, consistency is hard to find. Buttons and tabs look identical and are freely intermixed. The page title — the only significant difference between the save and load screens — is indicated by a subtle color change of the text on a small button located in the bottom right. Information should always be presented in read-order, especially the most important information on the page probably shouldn’t be hidden away in a corner. The help button is especially bad as well. It opens an external web browser without any warning beforehand, throwing you out of fullscreen mode in the process.