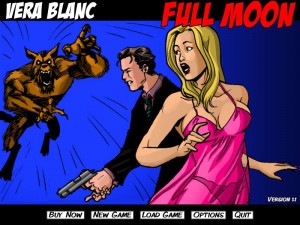 At age 16, Vera Blanc was diagnosed with brain cancer. Doctors cured her by ‘rewiring’ her brain, giving her incredible intelligence and the ability to read minds. She wasn’t exactly underprivileged before the operation either. Her dad’s a multimillionaire stylist ("one of the richest people in the world"), her (deceased) mother a Russian top-model. Vera herself graduated from university at age 14 — before her fancy new machine brain boosted her intelligence even further.

Vera wants to do something worthwhile with her new mind reading powers, so her dad sets her up with private detective Brandon Mackey to investigate reports of werewolf attacks in a small town in Germany.

Psychic powers can quickly ruin a detective story, especially mind reading which really takes the tension out of the investigation. At least it’s outright stated Vera’s mind reading can’t be used as evidence, only to provide leads for further investigation.

Attempts at mind reading trigger a minigame. It’s not that bad until you realize just how often you’ll be playing the same shitty word game. You can turn off minigames (not specific ones, just all or nothing), but only at the beginning of the playthrough. If you get bored halfway through, too bad; the only way to turn them off is to completely start over from the beginning of the story.

After a short VN-style prologue, Vera Blanc turns into an old-school mystery adventure game. The story progresses in numbered days, you visit locations on a map, collect clues, etc. The prologue isn’t that bad aside from the tedious minigames, but the writing oddly switches between second person narration and dialogue in third person limited, as if the game can’t decide if you’re supposed to be Vera or an external onlooker. The second person narration is especially annoying when it tells ‘you’ what to think or how to feel.

While the plot starts out ok-ish, it gets progressively more stupid as it goes on. Vera is an awful detective, regularly jumping to (often ridiculous) conclusions. It’s also hard to take her seriously when her clothes peel off like tissue paper just from climbing through a window.

Stop telling me what to think.

Vera Blanc doesn’t use the visual novel standard of character sprites on top of background images, but instead tells the story completely through comic panels. This is no Quartett though — the comic panels are low on detail and backgrounds are often reduced to flat colors or gradients. Facial expressions on close-ups tend to look a bit off, like Eva’s creepy rape face here.

Very rarely are background images used to fill up the space outside the current comic panel; most of the time, the background is simply left black.

She only climbed through a bathroom window.

The music is as sparse as the graphics: most scenes are quiet with only ambient sound being used. Occasionally having scenes without music can be a good thing, but this is too much. Especially in cases where the simplistic artwork fails to convey any mood.

Using comic book styling for the text box certainly matches the rest of the artwork, but the all-caps font wasn’t designed for reading large amounts of text. It’s readable, but tiresome and harder to read quickly than a normal font. Another problem I have is with the map screen. The clues button disappears when you’re on the map — exactly time when you’d want to look at them.

Telling a visual novel-like story through comic panels is brave, but requires much more artwork than the standard sprite and background system. Vera Blanc makes a good example of why you shouldn’t try this style on a limited budget. The writing is children’s cartoon level and Vera is too ‘perfect’ to be relatable.