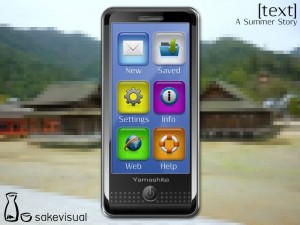 Maya’s on the first major unsupervised trip of her life. She’s traveling by train to visit her aging uncle at his shrine. Along the way, she keeps in touch with her mom via a string of text messages.

There’s no regular dialogue in [text] A Summer Story. All conversations take place entirely through text messages. The choice to omit normal dialogue makes the initial meeting with Maya’s uncle rather awkward. Everything up until that point has been buildup to their meeting, but the scene where she finally meets her uncle is omitted (to avoid needing dialogue). Instead, we’re told about it after the fact when she reports back to her mom through text messages. There aren’t any sprites either, but more on that later.

[text] A Summer Story isn’t very long — you’ll probably clear your first path in under ten minutes. For a story so reliant on tension, that leaves very little time for any unsettling feelings to creep in. Subsequent playthroughs are even worse, skipping through large chunks of (previously read) text gets you to the ending in 2-3 minutes.

Seven endings are simply too much for such a short story. What makes it worse in practice are the several endings where Maya ‘escapes’ without anything significant happening to her. It really sucks getting one of those as your first ending, given how hard it is to get in the right mood for the other endings afterwards.

Aside from the quaint presentation choices, [text] A Summer Story is a fairly traditional ghost story. Its short length makes it hard to get into the right mood and as a whole it doesn’t leave much of an impact.

The menu screens look polished and are extensively customized. The main method of text display is a NVL-style textbox covering the right side of the screen and occasionally a phone displaying a text message popping up on the left. Having to quickly switch back and forth between phone and text can be tiresome, but isn’t required too often. The bleep-bloop noises made by the phone did get on my nerves after a while.

Choices are displayed in a relatively subdued manner, directly below the text and using the same font. Having giant screen-filling choice buttons would look a bit stupid with how inane most choices are.

Aside from the menus and textbox display, the presentation is very minimalistic. Backgrounds are photos and there aren’t any sprites or event CG at all. Background transitions use a pixelate effect for some weird reason. I guess you could say it fits the mobile phone theme in a way, but it doesn’t mesh particularly well with the realistic photo backgrounds and shrine setting.

Music is limited to a single track on the titlescreen. Quite a few sound effects are used to enhance the dialogue, and some environmental sounds partly compensate for the missing soundtrack. Music can be a very effective tool to set a certain mood, the lack of a real soundtrack is a missed opportunity.

It’s too short to leave an impact and half the routes fizzle out without much happening. The lack of music and very limited visuals make it harder to create tension and the text is too terse to compensate.