That Cheap and Sacred Thing 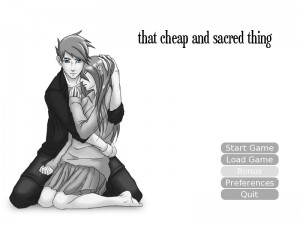 genre drama, sci-fi
creator carosene
website http://lemmasoft.renai.us/forums/viewtopic.php?f=11&t=10574
summary Girl with a tragic past spends a day with a robot prostitute her friends rented for her.

That Cheap and Sacred Thing (TCAST) opens with the protagonist, Autumn, monologuing about her world. Overs the course of the past few decades, androids have become commonplace. There are different types of androids, from servants to personal guards, companions for children and of course sex robots too. There isn’t much reason for Autumn to suddenly have these thoughts; all of what she explains should be normal to her. She’s only a teenager and the rise of androids as it were, happened before she was even born. It’s an explanation clearly for the benefit of the reader, to concisely explain the sci-fi setting, but at least some attempt has been made to make it sound as natural as possible.

Her family’s servant android walking into her room triggers an explanation of Autumn’s relationship with her mother and why she doesn’t have a personal android anymore. To sum up her relationship with mom — not good. Autumn calls her ‘Cheryl’ and doesn’t seem to consider her more than a nuisance. Her mom is barely home, doesn’t allow Autumn to bring over friends and both of them seemingly can’t wait until the day Autumn moves out.

Then there’s the point of Autumn’s lack of a personal android. Growing up, she used to have a MyPal named Elly (basically a robotic accountabili-buddy, a friend/guardian for children). Something went very wrong with Elly’s personality to the point where Autumn isn’t allowed to have any new androids and the family’s servant android has had her personality turned off. Autumn has secretly hidden a backup of Elly’s memory, which she randomly decides to take with her one day (I’m sure it won’t be important).

Well okay, there’s sort of a reason for Autumn to bring Elly’s backup. It’s Autumn’s 17th birthday, and her anniversary of getting Elly. Why that leads her to carry around a years-old memory backup, I dunno.

Autumn meets up with her friends who have a very strange sense of humor — they rented her a male android prostitute as a birthday present. There’s a small matter of having to fake Autumn’s signature and lie about her age in order to be able to rent the thing for her, but oh well. As part of the contract, Autumn is responsible for any damages occurring during her allotted time, but I’m sure that will never happen. I’m mildly confused about the sort of people that would buy their virgin friend a prostitute for her birthday. The future is weird, man.

It’s too late to get a refund, so Autumn reluctantly makes the best of her time with Jude, the robotic prostitution buddy. They spend the afternoon doing some date-like things; going to the movies, eating together at a restaurant. During their ‘date’, Autumn is constantly trying to poke through Jude’s human-like behavior to prove in a way he’s only a robot pretending to be human. A relatively innocent remark by Jude triggers a memory of Elly in Autumn which causes an emotional response so severe, Jude has to bring her to a hotel room so she can lay down and recover.

Through a lengthy flashback, we’re finally told the whole story about Elly and the exact nature of her malfunction. Autumn and Elly were super best friends growing up, with Elly being Autumn’s MyPal that’s not too surprising. What is surprising though, is that Autumn was capable of convincing Elly to override her programming. It’s not even limited to Elly, Autumn seems capable of convincing any android of rewriting their own programming. There’s no explanation for why Autumn should have this super power, and it’s a major plot hole.

As for the malfunction suffered by Elly… One day in elementary school, Autumn and another girl got into an argument during PE. The other girl picked up a baseball bat and took a swing at Autumn. Luckily, Elly was there and managed to wrestle the bat away from the enraged little girl. Having successfully removed the threat, Elly then smashed the girl’s head in with the bat. Out of spite I guess — the girl wasn’t a danger anymore. A robot defying its programming became a big scandal and Elly was scrapped to prevent further incidents, but the underlying cause of the error was never found. How Autumn was able to hide Elly’s memory backup from her parents and the police remains a mystery.

Autumn activates her Pokémon Power, robot charisma, and convinces Jude to run Elly’s personality backup. He refuses, as he should — what kind of poorly designed android would run a random customer’s code? Well, Jude apparently. Autumn manages to make him override his programming by, wait for it… insisting. Surely, no-one has though of that brilliant strategy before.

Running random memory backups has one unfortunate problem, it leaves a trace in Jude’s log file. The log file is stored on his internal hard drive (and not periodically wirelessly synced because derp). Whoops. So Autumn beats him to bits with a baseball bat she conveniently found in a nearby dumpster. There are many ways to deal with the stored log, but really, she chooses that? Breaking just the hard drive seems a lot cheaper/easier to me. Also, Jude does everything she says, why can’t he delete the log himself? Really, the only reason to pick the solution Autumn chooses is to make the scene more dramatic.

I have a problem with the idea of reviving Elly, be it temporarily or permanently. Elly’s malfunction is treated as a robot gaining free will, and while that’s certainly true, there’s zero recognition for the fact that killing the little girl was irrational and Elly could kill again at any time.

As for the aftermath of what happened to Jude. Autumn is forced to pay for the damages. That would mean the company would have to publicly admit renting out a sex bot to a 17 year-old and somehow ignore the fact Autumn’s signature was faked.

That Cheap and Sacred Thing has capable storytelling, but not a capable story. The info-dump at the beginning sounds relatively natural, pacing is good and characters well-defined. The scene with Jude at the end has striking visuals, even though the reason for the event it depicts relies on plot holes you could drive a truck through. The giant leaps of logic involve core parts of the story, and it was simply too much for me to suspend my disbelief.

The artwork is an odd mishmash of styles — the majority of backgrounds are painted, but there’s some 3D work in there too. The painted backgrounds are relatively low on detail and have some obvious perspective problems. There’s a noticeable texture in the paint left by brush strokes which is a nice effect and makes the backgrounds much more interesting to look at. TCAST has a handful event CG it uses for key moments in the story. These are of comparable quality to the sprites and really enhance the story.

Characters have some small pose variations. Well, except for Elly’s sprite which is far more expressive than the rest of the cast (except Jude when he’s running Elly’s personality). Sprites shift around by a few pixels during transitions due to a bad crop job.

The music is pretty shitty and extremely repetitive. I has to fight the urge to turn it off within the first five minutes. Sound effects are entirely absent.

The interface is all stock Ren’Py, just in white/grey instead of the default color scheme. Even the textbox is the Ren’Py default which is a shame because the rest of the VN has pretty decent production values. There’s even a bonus section on the title screen with an image gallery and an author talk, yet they couldn’t be bothered to customize anything else. What’s also kind of annoying is when the textbox disappears for a fraction of a second any time a character changes expressions — it’s unnecessary in ADV mode and the lack of a gradual fade in/out makes it extra jarring.

It’s decent, and relatively well-written. Exposition dumps are plausibly triggered by external events, the story is decently paced and important events are foreshadowed. The visuals enhance the story instead of merely accompanying it and extra or special artwork is used in the places that require them the most. However, the internal logic of the plot makes far less sense than I’m willing to accept — things unfold the way they do because the writer wanted it that way, not because they make sense.

One thought on “[review] That Cheap and Sacred Thing”