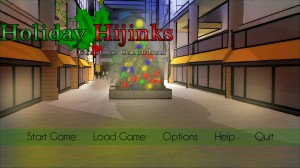 Christmas time: a time for family and gifts and feline masterminds conducting computer crimes. Rick and the gang get caught up in yet another bout of shenanigans involving Nekochan and Inukun just as they’re preparing to celebrate Christmas together…

Christmas Conundrum is a sequel to Holiday Hijinks: House on Haunted Hill. It shares many of the same characters, as well as many of the same problems. There’s still a confusingly large cast of sometimes hard to distinguish characters. Visual indicators like expression changes that can indicate which sprite matches which name are sadly absent. The confusing rapid-fire perspective flip-flopping from House on Haunted Hill is thankfully gone, but it still can’t seem to decide on a single main character.

Choices in this VN don’t always provide you with enough information to make an educated decision — small things like who the hell is making the choice. The worst part is when you’re suddenly confronted by a 5 question trivia/pop culture quiz which has very little to do with anything. At least rollback works, so it’s hard to fail.

Following the quiz is an awful attempt at a turn-based battle minigame. Your only actions are attack/defend/wait, but those last two seem to have little purpose. Of course there’s no GUI, so any changes to HP are displayed as text and the player will just have to remember them. Frustratingly hard is one thing, but I had lots of trouble even losing. Through some sort of random number generator fluke, I got in the situation where all my attacks missed. Amusingly though, enemy attacks stopped decreasing my HP after a while, rendering me immortal. After reloading, I got caught in an infinite loop of messages about enemies attacking me. Reloading a third time finally let me escape the loop.

I’m not sure what Christmas Conundrum is supposed to be. The plot is pretty flimsy (think children’s cartoon) and the characters are underdeveloped. I think it’s supposed to be funny, but the shoe-horned in pop culture references just leave me cold.

Some of them are looking a little green there.

Amateurish color fringing on the edges of sprites, most likely the result of some botched attempt at using a chroma key. Please, just use real transparency and if you have to use chrome keying for some bizarre reason, do it before you resize the sprites. The sprites seem too small for the window resolution, most of them barely reach above the middle of the screen. Only one expression per sprite not only makes them look static, but it actually causes problems with a cast this size as it’s harder to mentally map names to faces. At one point, you’re asked about a website displayed on a tablet, but the actual image doesn’t show any website (forgot to include it?).

No, it’s a giant floating JPEG.

Backgrounds are mediocre 3D renders, some of the filtering used makes them look even more grimy. A prominently displayed (due to the sprites in that scene being ridiculously far apart) Christmas tree is as blurry as an N64 game texture. A big advantage of using 3D renders (as opposed to filtered photos) is having full control over the camera position — so why are there so many instances where the wrong angle/zoom is used for the given sprites?

I don’t really care about any of the characters, and that leaves me with little else left. The only notable points for me were a quiz and a battle minigame — neither really worked. Everything feels a little sloppy/rushed.