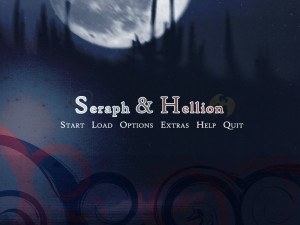 Aili (nameable) is just a normal girl whose only notable skill is playing pinball. Don’t worry, this doesn’t factor into the plot in any meaningful way. One fateful day, she meets two boys (on separate occasions) who both turn out to go to her school.

The first potential love interest is Demetri (real name Stanley) who’s "mysterious and intriguing". He doesn’t do anything particularly mysterious or intriguing, but Aili doesn’t hesitate to tell the reader otherwise.

Guy number two is Leigh who is "polite" and "a sweet guy". Aili’s really efficient at analyzing personalities considering she doesn’t know the guy and at that point the only thing he’s said was "Yes. I’m Leigh". Oh well.

The middle part of the story consists mainly of generic school life. Opportunities arise to get close to either one of the guys — Demetri hangs out at the arcade, Leigh avoids people. The one notable event in this middle part is an optional scene where Aili accidentally overhears her friends having a conversation about how they secretly dislike her and don’t consider her a friend at all. harsh.

If you’ve paid attention to the genre in the info box, you’ll notice we’re still missing the fantasy part at this point. Having two guys fawn over you is certainly a fantasy to many, but that’s of course not what it means here.

WTF happened to his right arm?

One day while walking through the school, Aili notices someone carrying a flaming sword running through the hallway. The boy looks suspiciously like Demetri, so she decides to follow him. He and Leigh turn out to be not quite human and now they’re fighting to the death. Aili needs to pick a side in the fight: Demetri or Leigh.

An interesting tidbit here, Leigh is a ‘destroyer’ angel but Demetri is the son of Satan. It’s very strange how Seraph & Hellion isn’t biased to one side at all, even though one of them is the fucking demon spawn of the lord of darkness. You’d think that in such a fight, one little girl wouldn’t be able to change much. Not true, both of them have a fatal and extremely easy to abuse weakness. Leigh is killed by witnessing public displays of affection. He’s not a particularly friendly angel, but really, is he so evil that ‘love’ kills him? Demetri is perhaps even more pathetic. He has a burning sword, right? Just throw some water over him and he’s screwed. I think I know who his mother was.

Seraph & Hellion is mostly your standard babby’s first otome, but the fantasy bit at the end just comes across as bizarre.

Seraph & Hellion is very strange in that the user interface is very polished and significantly customized from the Ren’Py defaults, yet the character art is a poorly drawn anatomy nightmare. One minor quibble I have with the user interface is the save and load screens look exactly the same.

Also unfitting is the extremely epic fantasy music which makes up the soundtrack. Everything save for the final scene in the VN is generic slice of life high school romance. In my experience, walking to school doesn’t really evoke that Lord of the Rings feel. The music used wasn’t really meant to be looped; the tracks are padded with several seconds of silence which makes looping extremely noticeable.

Are they giants, or is the school a miniature?

As for the character and background art… The filtering used can’t hide the different types of background image sources used (both photographs and drawings). Trees look particularly bad under this type of filtering. Sprite art follows the ‘standard’ one pose per character. Good use of camera pans to make event graphics more impactful.

After a misleading first impression (fancy name/titlescreen, advertised as fantasy) Seraph & Hellion turns out to be little more than my_first_otome with above average programming and customization. The fantasy parts are very silly and only serve to give a more definite ending to an otherwise uneventful story.