The Elf and the Warrior PG13 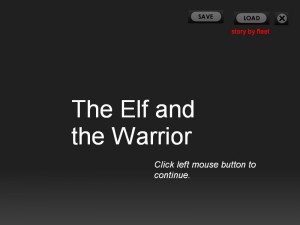 genre fantasy, romance
creator fleet
website http://lemmasoft.renai.us/forums/viewtopic.php?f=11&t=18639
summary Elf girl gets her ass handed to her by a dragon, pays a bum with her body to kill it.

The mastermind behind the amazingly entertaining Arnie and the Hitchhiker is back with a short kinetic novel about the love between an elf and a warrior.

After the charmingly simplistic titlescreen and some disclaimers, we’re treated to an image of a naked lady groping a life-sized plastic donkey statue. I guess technically she’s still wearing a loincloth, but how much does that really count for when it’s see-through… Her ass-petting life is rudely interrupted when a dragon shows up and chases the donkey away.

After a short chase, the dragon flies off… for some reason. The donkey’s lying on the ground, apparently killed in some way that left no visible mark (aside from it suddenly growing fur). Elf girl swears revenge, gets up and goes off in some random direction.

Well that’s swell and all, but there’s this nagging feeling in the back of my mind there’s something missing in this kinetic novel. Oh yeah, that’s it — words. It doesn’t have any fucking words. Let me repeat this one more time: it’s a ‘kinetic novel’ without any words.

Back at the plot, elf girl has reached the local home depot randomly placed stone tower where she attempts to pick up a day laborer. Luckily for her, a useless looking bum with a sword just so happens to be sitting outside. A little begging and pleading later, she gets him to come with her to fight a dragon. I wonder what she said to him…

The warrior hides behind a tree near the donkey carcass in hopes of the dragon coming back. Luckily for everyone involved, this dragon can smell plot convenience a mile away and inexplicably returns to the scene of the crime. Sword dude jumps out from behind the tree and confronts the winged beast. My best understanding from the CGs that follow is: the dragon lands, gets on his rear legs and calmly challenges the warrior to a boxing match. The two walk to an empty field, but the warrior easily defeats the dragon by bringing a sword to a fist fight.

Elf girl takes warrior man (such deep and engaging characters) to her implausibly built tree home and pays him for his efforts with her body. Somehow I’m not surprised by this sequence of events. When warrior man comes back for more the next day, the elf has suddenly skipped town. Several months pass (illustrated by this image) until one day… 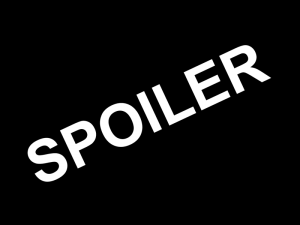 That CG is golden — his "oh crap" expression, her "whatcha gonna do about it" pose — simply glorious. At least she’s kind of wearing clothes now. They get married, the end.

While the ugly red "made by fleet" watermark is still on every single image, it’s now considerably crisper than it was in Arnie. The save/load buttons are still as ugly and misaligned as they were though. Non-screen-filling backgrounds are also still a problem — you can see a gradient poking through at the top/bottom edges.

Characters aren’t nearly as creepy as the were in Arnie, but they still have their fair share of demonic grins and unfortunate modelling. Elf girl has a nasty fungus infection covering her tits in favor of wearing actual clothing. The warrior’s clothes fit around him like shrink-wrap. Post 1996 techniques like proper lighting are apparently for pussies. Beautiful sweeping fantasy landscapes work considerably less well when your landscape is pretty much just a plain with an ill-fitting JPEG for a background.

Music is somehow even worse than the 20 second loops in the last fleet production I reviewed. We’re down to 5-10 second loops now. Look forward to 2014 when the background music will be just one note repeated over and over.