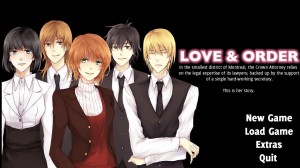 Dana’s sprite keeps staring to the side.

You play as Dana Larose, a young woman who’s just gotten a new job as secretary at the Crown Attorney’s office in the smallest district of Montreal. There’s a very short briefing by Dana’s superior, Ross, and then it’s time for work (sim gameplay). You get a couple of lines when meeting each of the 4 love interests for the first time, but otherwise dialogue is basically limited to various forms of "Do X for me".

Any illusions of this game being story-based quickly fly out the window. Romance feels like an afterthought; you might luck into a few standalone one minute scenes, but even ‘dates’ are only a couple of lines long. Being romantically involved with someone changes a few lines in the epilogue and your ending CG. Unique lines only amount to around 10 minutes per love interest and the characters themselves are one-dimensional.

Not enough room to point out all the graphical flaws.

There’s a single ‘main’ storyline where Dana takes it upon herself to be the world’s first secretary detective and tries to solve some random old case during work hours. Her only motivation is finding a note about it in her desk. Basically it’s an extremely long fetch quest with some time delays and stat checks added so you can’t finish it while ignoring the simulation gameplay. Once you solve it, the game abruptly ends.

The core gameplay consists of completing tasks for your coworkers. Your outstanding tasks can be found under the always visible ‘projects’ button. Each project consists of a number of subtasks, completing an entire project gives you a large affection bonus. Working increases stress and high stress makes you randomly fail tasks, leading to more stress which quickly spirals out of control. The trick is to know when to decline work and correctly balancing the amount of work you do for each person.

Love & Order tends to explain its rules only after you’ve broken them leading to quite a few beginner’s traps. For example, working during your lunch break dramatically increases stress and new tasks often get stealth-added to your projects list without matching dialogue. What’s different from a lot of mediocre sim games I’ve played is that it’s actually possible to figure out most things by yourself — you’re always told why you’re being penalized.

While kind of satisfying for the first 15 minutes or so, the sim gameplay is still basically the same thing over and over again. It goes on for far too long after you’ve figured it out; especially if you want to get all the endings. There’s also no pressure or time limit or purpose. The only thing you can achieve with the sim gameplay is getting a date, which is quite unrewarding given the ease of doing so and lackluster romance writing.

Love & Order is incredibly stingy in dealing out art assets. Sprites only have a single pose and even expressions are limited; in many cases only the eyebrows move, with only 4-5 expressions each. I kinda like the art style of the sprites, but they’re too expressionless and have quite a bit of same-face going on. Outlines of some sprites look a little pixelated, and Jonathan has white fringes around his hair.

Backgrounds are adequate, but ruined by blurriness and overenthusiastic copy-pasting of chairs and such. Much of the furniture appears to have been cut out of some other image (poorly). Perspective goofs are also a common occurrence, some of them are extremely noticeable. Scenery outside windows is often poorly matched perspective-wise. The reception background appears to contain an untextured pillar sketch.

Event CG also follow the "absolute bare minimum" trend of the rest of the artwork. There are six in total: one at the start, one at the end, and one for each love interest. Characters in the event CG still look fine, but backgrounds are all scribbles, blur and geometric shapes.

I actually quite liked the music; it’s subdued and pleasant to listen to. Tracks sound similar enough that music switching isn’t too jarring and it has a good balance between switching music and keeping it constant. My only real complaint is that sometimes music stops for several scenes without a clear reason.

The always visible on-screen stats and location take up a little too much room for my tastes and their asymmetric sizes also really bug me for some reason. The textbox is placed oddly high up the screen and text speed is fixed at instant. Rollback is disabled, there’s no text log and you can only save at your desk — accidentally skip a line and you’re fucked.

Basically has no story. Gameplay is surprisingly not afwul, but very repetitive and outstays its welcome. Secretary-detective main storyline wasn’t particularly engaging or fitting.