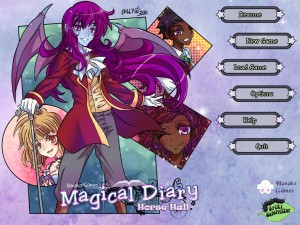 Mary Sue (name changeable) is starting her first year at Iris Academy, school of magic, after discovering her potential for magic three years earlier. Magical Diary starts with a character customization screen allowing you to pick a name and appearance. Customization is limited by the requirement of having to be a 16 year-old girl dressed in a school-regulation robe.

The premise alone is already rather erm, Harry Potter, but it goes even further by including a dateable professor Snape clone. Most of the actual plot consists of short daily school life events, with lighthearted mini-plots that usually resolve themselves within a week. The more meaty subplots (ones longer than 5 minutes) are tied to specific characters. Despite that, Magical Diary does surprisingly little to push you towards the (much more interesting) character paths. It’s also not immediately clear which characters have routes — it can seem a bit arbitrary.

When you get involved with someone, the regular gameplay continues as normal, but you get extra character-specific story scenes in-between the other events. The gameplay becomes largely a distraction at this point, your academic achievements don’t really matter for what’s happening in the character route.

I’d say Magical Diary was meant for kids if not for some dubious subject matter. It treats institutionalized hazing as a good thing, the school is totally ok with it and you’re ‘weird’ if you refuse to play along (but at least you have the option). The whole dating your middle-aged teacher even though you’re only a 16 year-old girl thing is also rather dubious. Despite that, the teacher and demon boy routes are the most interesting (if only for a moment). In particular demon boy Damien, who’s not particularly well liked since he’s well… a demon and kind of a dick to other people. Mary Sue then discovers, of course, that he’s just suffering from a clichéd tragic past and he’s just misunderstood. But — plot twist — he really was evil all along and tries to steal her soul. It’s an interesting idea, but the game doesn’t really carry it any further. How or why he’s evil is scarcely touched upon and while you can join him in his evil ways, the game ends immediately afterwards.

The character-specific plots are the most interesting, but they still feel more like a side-attraction than the main course. Part of it is the fragmented method of story telling, breaking everything up into small chunks to fit inside the sim game mold. Another factor is the relatively short length (hard to measure, but about 20-30 minutes per character). The main conflict is resolved weeks before the end of the game, leading to a rather unsatisfying ending.

Like a lot of other stat raising games made with Ren’Py, Magical Diary doesn’t try very hard to explain its gameplay beyond "press button to raise stats". Most of it is pretty easy to figure out, primarily because the simulation gameplay is generic as fuck. It’d be nice to at least for once have the option of learning a sim game’s rules before playing.

So you start blindly grinding some magic stats, gradually unlocking a bunch of different spells. At this point you might be wondering: what the fuck do I use these spells for? Well, at regular points in the story you’re thrown into a first-person dungeon crawler puzzle which you must solve using your arsenal of spells. Most sim games are all about replayability and Magical Diary is no different, but once you solve a puzzle it loses its appeal — a bit of an odd fit. Instead of enhancing each other, the story, simulation and puzzle elements don’t really mix all that well and some elements are in direct conflict.

The puzzles are a nice diversion, but often rely more on having a particular spell than insight. They’re further hobbled by clunky controls and lackluster visuals. Some spells are way more useful than others, advanced spells are rarely useful. The puzzles have multiple solutions, which helps with replayability a bit, but there’s not really any pressure to search those out.

Magical Diary’s sim gameplay has two major features. One: You get to schedule the activities for the entire week at once. Two: The skip key actually works for once and lets you speed through the generic "performing activity X" texts. It’s possible to do a week’s worth of grinding in just a few seconds. The game is also mercifully short, with a single playthrough spanning only 30-something weeks and with at least one real story event every week. The first playthrough took me about two hours, with each additional playthrough taking just over an hour.

Some of the side characters were made with the same character creator as your main character. The shapeless robe school uniform makes for rather dull-looking characters in general. At least most of the main cast has a secondary pose, even if I’m not exactly a fan of the character designs… The ever present oversized side image looks hideous.

Backgrounds are stock art, but good quality so I don’t really mind. Given the fantastical setting, stock school backgrounds are a bit plain and boring. Their art style doesn’t match the far more cartoony style of all the other graphics. Disappointingly, there’s only a single CG in the entire game. I understand that the customizability makes it hard to show the main character (you’d have to support all configurations), but why can’t there be event images without the main character in it?

The music is pretty catchy, and matches the lighthearted tone of everything else. Many tracks are only about a minute long, which makes them feel overly repetitive. The dungeon/exam music is especially grating and short. At least all the music loops cleanly without any pauses or other glitches.

Some special effects are really good, some are really bad. Effects for spells are generally quite good with some nice light effects, but sprite/background transitions just use these awful star wipes constantly. The one for backgrounds especially is eye-searingly ugly, off-center and the animation jitters.

The interface adds some padding to the right when going fullscreen on a widescreen monitor. The space isn’t really used for anything important, but I guess it’s better than just having black bars. Magical Diary uses the same inner-window approach to the main interface as Date Warp did and I still don’t like it. Looking through a smaller window into the game world hinders immersion and reminds me of times past where large borders around the screen were a necessary evil caused by hardware limitations.

The sim gameplay is bland but tolerable, mostly because you can zoom past it in a reasonable amount of time. Character routes have some interesting ideas, but not enough to transcend the generic slice-of-life-ness of everything else.