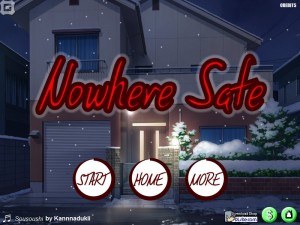 Kimiko is an agoraphobic shut-in, living somewhere in Japan. She hasn’t set a foot outside her home in years, living off money she obtained in a sexual harassment lawsuit six years prior. The VN starts with a lengthy monologue by Kimiko explaining all this, including how she exaggerated (lied) in court in order to get more money. Good thing she doesn’t feel any guilt for lying, that would be a total bummer. The opening monologue is made considerably more awkward by the decision not to reveal Kimiko’s name/age/gender until later.

After being awarded an absurd amount of money ("enough to live on for the rest of her life"), she managed to successfully squander it in only six years. You’d think that would put some pressure on Kimiko to go outside, but her lack of funds never really seems to become an active concern. The way she talks about the sexual harassment lawsuit makes you wonder what the hell happened, since Kimiko doesn’t seem to be bothered by it in the slightest (her agoraphobia is entirely unrelated). Yet it was apparently severe enough to award her a giant sack of money. We eventually find out her boss patted her on the butt once to get her to move out of the way. What the hell kind of "exaggeration" did she use?!

Through rather convoluted means, Kimiko meets a domatophobic (afraid of being inside houses) man named Kento with whom she falls in love. Their first meeting results in Kimiko fainting in the door opening and lying there with the door open for a good 12 hours or so. We’re lead to believe that during this time Kento wrote her a letter full of obvious lies and delivered it to her somehow (hopefully without noticing Kimiko). It’s not a flaw in the story, Kimiko is just being rather dumb about it.

Nowhere Safe defies any type of normal categorization. It’s some kind of psychological drama romantic comedy thriller mix, unable to even decide if it wants to make fun of Kimiko’s mental illness or handle it seriously. The use of Comic Sans, wacky music and overall silliness make Nowhere Safe seem like a comedy, but then it starts talking about Kimiko’s traumas and somewhat seriously analyzing how she came to be in her state. At the same time, a ‘hooded stalker’ subplot is introduced in a weird attempt at also becoming a thriller. These attempts at seriousness are spoiled by goofy shit like the root cause for Kimiko’s agoraphobia turning out to be a dumb-looking haircut in high school.

The stalker subplot is as silly as the rest and involves a man walking around town in his favorite demon summoner robes. Kimiko’s new psychiatrist is the stalker’s sister. He’s a ‘mentally ill’ repeat offender (of what?) and was about to be locked up for life for forcing himself into Kimiko’s apartment (seems excessive). His dear sister stole Kimiko’s mail (somehow) and lied to the court in order to secretly prevent Kimiko from testifying. Kento was also a witness of the crime, but I guess the court didn’t like his face or something..

Choices exist, but they don’t seem to affect the ending in any way. Neither does the one-time "dress up Kimiko’s friend" minigame (why does it exist?!). In a failed attempt at interactivity, you’re made to click on the door handle whenever Kimiko feels the need to open the front door. It gets old fast and becomes particularly annoying when you know there’s a creepy man in a robe outside. Opening the locked door would be utterly ridiculous, but you’re forced to open it anyway. For some reason Kimiko doesn’t appear to be familiar with the concept of glass, which lets you see who’s outside without opening the door, nor does she ever try to ask who’s outside prior to opening the door.

My best attempt at describing the story as a whole would be: a confused mess of outrageous anecdotes and events, barely connected and desperately in search of direction. Many of the developments hinge on people being complete morons. The stalker plot, which seems like it’s supposed to be the core of the story, is severely underdeveloped and only takes up a fraction of the content. Halfway through the epilogue, it suddenly transitions into a cliffhanger ending (apparently Nowhere Safe is only episode 1 in a series). Mr. stalker gets out and throws a rock through the glass pane in Kimiko’s door. Are we supposed to be afraid? If that’s the best he can do, he’s not getting in anytime soon…

Backgrounds are pretty good quality stock art, but since you spend the majority of the VN inside Kimiko’s hallway you don’t see other backgrounds all that much. The hallway background seems an odd fit — either Kimiko is dumber than a box of rocks, or all the glass allowing her to easily look outside shouldn’t be there.

Make way for the muscle twins.

Sprites are from the painfully overused Blue Forest set. They’re extremely recognizable and not even all that good… Two muscle men ‘therapists’ have the same face and body, but no mention in the text of them looking identical for some reason.

The music is way too cheerful and wacky for the serious scenes. It doesn’t loop all that cleanly either, resulting in a noticeable hiccup when a track restarts. The textbox is also way too cheerful: purple with Comic Sans (let’s talk about our mental health problems in Comic fucking Sans).

Nowhere Safe is a curious mix of bizarre logic and genre switches. Events often turn out even more bafflingly stupid than you thought possible.