Another year, another NaNoRenO. Like I did last year, I’ll try to write at least a short review for everything that comes out. The way I post them will be a bit different — instead of posting all reviews at once, I’ll upload them in small batches every couple of days. I’ll generally try to review things in release order, unless there’s a compelling reason not to (broken download links, bugs, etc).


This Is Where I Want To Die 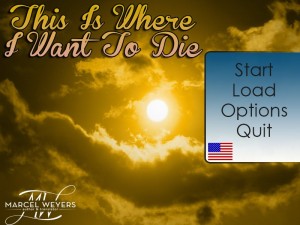 This review spoils the entire VN, there’s no other way to do it. This is Where I Want to Die tries to trick the reader into thinking the protagonist is female, while in reality he was a gay man all along. It achieves this by never naming or showing the protagonist, and when unnamed blob gets married to male blob the chances of being female rise to "more probable than not". Not knowing who you are makes for a tiresome read (since you continuously need to take every possibility into account). Everything up until the final 30 seconds is just there for padding/misdirection. Some dudes see you holding hands in public and murder you with a knife for being gay. It ends with an important moral: don’t stab people in the chest.

The presentation is awful — blurry grayscale photos and silhouette sprites. I’ve never been a fan of super flat resizing textboxes either. Two sound effects deserve some special attention. First, a powerful punch that’ll have you rolling with laughter right before the emotional climax of the story. Second, the button rollover/press sound which is a serious contender for most annoying sound in the world. 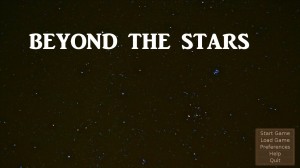 Almost immediately you’re presented with four options: A/B/C/D. Which one you pick means fuck-all, it just swaps around the order of 4 completely interchangeable planetary exploration scenes. Then you discover some ruins and a space dragon jumps in front of the camera, telling you to get off his property. No, that does not make more sense in context.

More notable than the non-story are the sprites. Their faces are nightmare fuel, and having near identical bodies certainly doesn’t help. An important question remains unanswered: why are they continuously depicted doing some kind of freaky synchronized dance? Are they trying to steal my soul with an ancient voodoo ritual dance?! I imagine it would be easier to tell the difference between an awkward pose and synchronized dancing if the VN would’ve had any sort of audio.

Stars in Their Eyes 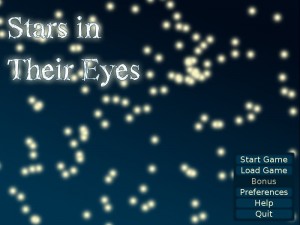 Painfully short and can be effectively condensed into a single sentence: “Hey Rena, chase your dreams.” Is it even worth complaining anymore about an all-star soundtrack consisting of solely Kevin MacLeod music, especially during NaNoRenO? Anyway, I wrote down "like Ripples, but shittier" when I was roughly 10 lines in. Turns out I was spot on, making a Ripples-alike was actually the intent. It even has a sprite (the only one) drawn by the same artist. Surprisingly buggy for something only 3 minutes long. Using the skip key fucks up sprite movement and trying to read it twice results in a crash. 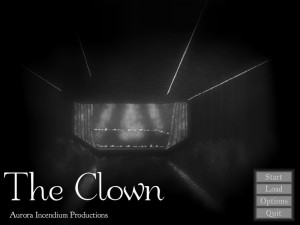 genre horror
creator Aurora Incendium Productions
website http://aurora-incendium.vnovel.com/kinetic-novel/the-clown-is-released
summary You wake up in a fortress full of creepy clown puppets and then you leave.

The unnamed protagonist wakes up in a strange hallway and finds a room full of clown puppets. He or she then walks into a circus-themed auditorium full of faceless people watching a clown performance. The ending doesn’t clear up much, other than confirming the building was a fortress and the protagonist (likely) female. Given the "you wake up in the castle of creepy clowns" premise and overall magic I would’ve assumed the whole thing was a dream, but apparently not. If not, how the hell did she get there? Basically, some mildly disturbing things happen and then you leave without learning much about anything.

Rather than use sprites, the entire thing is told through custom event graphics. They’re not very good, but the more immersive atmosphere they create helps with the overall mood. The writing is pretty bad: almost like reading the Simple English version of Wikipedia, but with more arbitrarily placed commas and dodgy grammar. 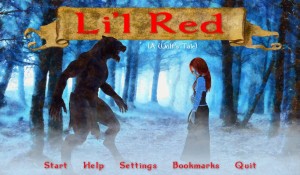 Surprisingly decent. The very heavy filtering is quite effective in hiding the unnatural look of the 3D renders. Not showing the faces a whole lot also helps. Because of the 3D it can afford to use a lot of event CG to tell the story, with lots of zooms/pans in an attempt to make the static images look more interesting. Often, the camera movement feels pointless — just movement for movement’s sake, rather than using it for storytelling purposes.

As for the story, it’s nominally based on Little Red Riding Hood, but the resemblance is superficial at best. For one, the wolf acts and talks like a polite gentleman. He even saves Red when a drunk soldier appears out of nowhere and tries to stab her for no good reason. What the hell was he doing in the middle of a wolf-man infested forest in the middle of the night? The story is told by an in-universe narrator, regaling the tale to his son. He seems to know more than is possible, oddly refers to Red as ‘that girl’ and forgets he’s talking in past tense. Everyone, the father and son especially, speaks in some extraordinarily unwieldy English. They don’t use contractions and keep reminding each other of things they already know. Depending on the choices you make during the story, the narrator changes ex post facto to either Red’s father, or the wolf. It makes no sense and adds little to the experience. The "who are the real beasts" angle loses meaning when the wolves are bipedal, polite and speak proper English.