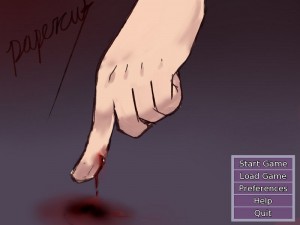 This VN is written entirely in second person for some reason. Despite repeated attempts to convince me otherwise, I found it difficult to put myself in the role of a mentally ill sex-obsessed cheating housewife protagonist. "You" don’t have any explicit lines, what you do and say is just summarized in the textbox. I also found it odd no-one even had a name, they’re just labeled by role (husband, paperboy). The purple textbox seems appropriate for the metric fuck-tons of purple prose. Descriptions continuously go into ridiculous unnecessary detail — I don’t need to know what material my doorstep is made out of, y’know…

The main character is a horrible person: she tries nothing to fix her marriage, doesn’t talk to her husband at all and yet still blames him for… something. She’s completely passive and utterly lacking in ambition until she randomly decides to woo the paper boy (who’s conveniently 18+). No modern romance novel is complete without gratuitous smut and Papercut is no exception. It goes into some detail regarding the desires of our cock-hungry protagonist and isn’t afraid to add in a gratuitous masturbation scene. The (graphics-less) sex scenes are a highlight; not because they’re any good, but the euphemisms are incredible ("your cat that’s resting between your legs", "vanilla hills", "little friend", "tent"). Either this was written by a time-traveler from the 50’s, or someone’s granny.

There’s a single choice, right near the end of the VN, that determines which ending you get. Choose wrong and you become retroactively pregnant. The protagonist hopes it’s the paperboy’s so she can ruin his life (what a nice lady). I’m not sure what the deal is with the weird narrow textbox — there’s no side image or anything that would need the space. The visuals aren’t terribly exciting and the sprites are a little grainy. The background music cuts out entirely for long stretches of time.

genre otome
creator Seraphim Entertainment
website http://lemmasoft.renai.us/forums/viewtopic.php?f=11&t=20074
summary Supernanny has to train her bishounen of choice to be CEO material.

Is it a demo for a fundraiser campaign, or is it a NaNoRenO release? I dunno, but it at least gave us this amazingly cheesy promo video:

A young woman (nameable), known as the "goddess of babysitting and teaching" is approached by the CEO of a large Japanese (of course Japanese) entertainment company to ‘train’ one of his sons. Problem is, they’re all 20-something years old and miss teacher here is an under qualified babysitter. That doesn’t stop her though. She gets to pick her favorite bishie and train him in 3 days to be a worthy successor as CEO of the company. All four are of course walking otome game stereotypes (playboy, naive, aggressive, passive). Naturally, they also have different mothers and a nice variety of tragic pasts.

Aside from the utterly ridiculous premise, the structure is very mechanical — day 1: analysis, day 2: advice, day 3: training complete. The training part is thoroughly uninteresting; naive guy gets taken advantage of, aggressive guy keeps picking fights, etc. Outside of training are such mainstays as the guy walking in on her in the shower, him cooking for her, etc. Naturally there’s the potential for love, and the POV even briefly switches back to the CEO stating he hoped Teacher would end up with one of his sons.

So far, so generic. Yet there’s one thing elevating this VN to an even greater plane of WHY: all four routes are damn near the same. Their responses change, and the training part is subtly different, but everything else is bloody identical. Reading through even the second route pounds you with déjà vu hard enough to crush diamond. Even the walking in on Teacher in the shower bit happens in every route (how does that even happen btw? are they deaf?)

The sprites are generally pretty nice although the artist doesn’t really seem to be able to draw old people. Or men’s collars, abs (see nipple-less caterpillar golem), or men in general. It has a bunch of event CG, pretty good ones even, but the regular backgrounds are atrocious. The entire GUI is customized (yay), but it errors when leaving the save screen (less yay). An unfortunate choice of font, small text and nuclear cyan background lines make the text unnecessarily hard to read with any sort of speed. 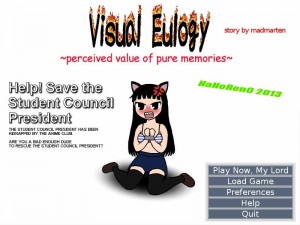 genre parody
creator madmarten
website http://lemmasoft.renai.us/forums/viewtopic.php?f=11&t=20097
summary In a world devastated by VN, one NEET gets tasked with creating a visual novel of his own.

Oh my, a parody VN and I actually kinda liked it — what’s the world coming to? It’s chock-full of (E)VN fandom jokes with some pretty good one-liners. The jokes are often crude which may be a turn-off for some, and if you’re not familiar with all the stuff that’s being referenced there’s little else left. The middle part drags on a bit when too much time is spent moving the (not very interesting) story forward. Presentation is weak (smells like programmer art) and backgrounds consist mostly of gradients. A lack of any sort of sound/music is disappointing. 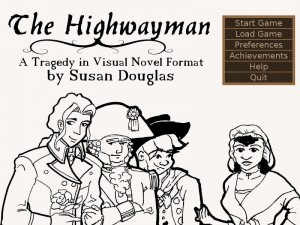 If you’re not already familiar with the poem, better read it first or you’ll be in for a confusing time. This adaptation rushes through the plot without taking the time to introduce either the characters or setting in more detail than the bare minimum. The structure is very mechanical: the female protagonist talks to three men in sequence, each with two choices. The second choice is always kiss/don’t kiss which may not make a whole lot of sense based on decisions made earlier. The VN seems more focused on creating lots of choices/endings than telling a good story.

When I saw an achievements button on the titlescreen (in a visual novel!), I knee-jerked so hard I nearly tore a ligament. Turns out it’s just a list of which endings you’ve obtained. The uncolored sprites are dull-looking, and the background filter removes so much detail there’s little left to look at. No music or sound in combination with a short, rushed story results in little immersion. 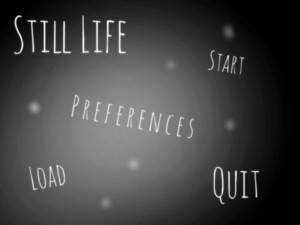 Still Life is written more like an illustrated novel than a normal VN: the dialogue is full of identifiers (he said/she said). Text color is used to indicate the current point of view, not the current speaker like in other VNs. It’s rather counter-intuitive when you see literal spoken dialogue rendered in a color matching a different character. In addition, time/location/characters are continuously described in overly ambiguous or roundabout ways and the POV keeps switching around. In an apparent attempt to be poetic, the story is pointlessly obfuscated to a tiresome degree.

The Narcissu-style presentation (widescreen BG banner without sprites), is accompanied by a Narcissu style plot — there’s a lot of being miserable in a hospital setting. Unnamed brother feels responsible for his non-blood-related sister after being in a car accident that left her paralyzed. They’re both miserable a lot and are eventually separated. He lives for years under the impression she’s dead after finding a grave with his sister’s name on it. Apparently someone with the same name (and I guess, age) died nearby. What a dumb way to create drama. The preferences screen is removed for no good reason, leaving you with no way to change the default (slow) text speed. Don’t be mislead by the "preferences" text on the title screen, that one only has a windowed /fullscreen toggle.