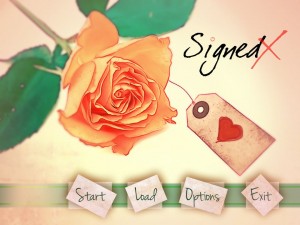 Marty (nameable) catches an attractive young man placing a bouquet of flowers on her school desk. She quickly hides before he notices and starts plotting a ‘romantic’ first meeting between her and her secret admirer. No matter what she tries though, it keeps going wrong in WACKY ways. Her failings make up the bulk of the VN, until in the end she finally decides to do the rational thing and just talk to the guy. Turns out the flowers weren’t even meant for her. They were accidentally placed on the wrong desk. Double spoiler: The flowers weren’t from her ‘secret admirer’ either, he was delivering them for a friend. I was afraid it would turn out to be one of those reality-warping VNs where dialogue choices can change the past, but this solution is actually quite elegant. Well played.

As for how much I liked it: a well-resounding "meh". Signed X doesn’t really do anything new or particularly interesting. It has a vibe similar to something like Witch Spell, but without the crazy over-the-top bits that make it funny. Most of the attempts at humor in Signed X come from Marty’s idiotic schemes going wrong in predictable ways.

The sprites aren’t bad although Marty’s haircut is kinda weird and some of her facial expressions can be a bit… serial killer like. Backgrounds however are absolutely awful. The molten plastic inferno photo filter makes another appearance, and most background photos are taken at an angle incompatible with the sprites. Ugly chibi sprites drawn on top of photos take the place of event CGs. I understand there was a heavy time pressure, but there are other, more elegant ways to avoid drawing a full event image. Music is poorly encoded, some tracks way worse than others. It also uses a few ~20 second loops as BGM (obviously too short). 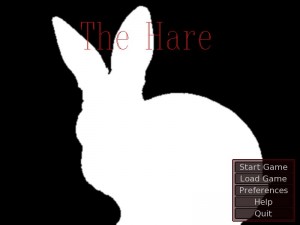 An attempt to parody The Raven, but instead of doing something clever or creative just flips some superficial elements around and ruins much of the rhythm and alliteration of the original. It doesn’t work as a parody and it doesn’t work as a poem. Like The Highwayman, it relies on the user to be familiar with a famous poem (in this case without telling anyone).

Ah, the visuals… just look at it, there’s almost nothing there. If you don’t have anything else worthwhile to put on the screen, why not use the space for text? Most of the screen is black and yet the textbox still manages to obscure what little visuals there are. I also wonder what part of a story about biblical angels is supposed to justify using pixelation dissolves. The choice of a long classical piece for background music doesn’t quite work, the mood is often out of sync with the text. 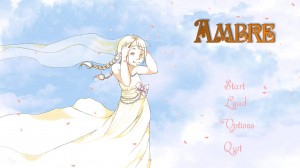 Tristan, a 30 year-old man, finds a little girl crying on a swing in the park. She doesn’t know why she’s sad. In fact, the only thing she can remember is her name: Ambre. Tristan takes her home and starts living with her. He curiously makes no effort to contact the police or otherwise try to find her parents. It all gets very creepy, very fast when Ambre falls in love with Tristan and their relationship becomes sexual. Did I mention she looks about 8 years old? There’s more to the story, and things aren’t quite so bad as they initially seem, but sticking with it until that point requires a degree of faith in the writer some readers may not have.

Ambre is revealed to be Tristan’s wife who mentally reverted to a child-like state from the shock of being told she’s infertile. It’s a loop that keeps repeating every time she finds out she can’t get pregnant. The story continues for a second loop, this time from Tristan’s point of view, showing the painful reality of the situation. That second loop is pretty boring, there’s not enough new content to justify its length and there’s not much of an ending afterwards. Ambre’s sprite is that of a child during the first loop, even though the method of display is third-person, implying neutrality. It would’ve made a lot more sense to show things from Ambre’s perspective — not showing her true appearance is a clever trick, showing an incorrect sprite is a lie.

A number of strange grammar mistakes hint at an English translation (from French) done by a non-native speaker. An editor to cut down on some of the more ridiculous sentence constructions and purple prose would’ve been nice. The art styles for the sprites and CGs is so wildly different it becomes a distraction. Backgrounds vary in quality; the city street one is particularly bad. That one also has some leaves blowing across the bottom of the screen, but it’s a really unconvincing effect (unless they’re supposed to look like bouncy boomerang leaves). While not the most varied soundtrack ever made, I really liked the music. 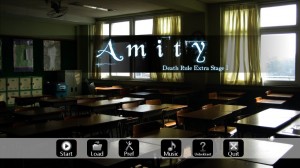 Why does this even exist as a separate release? It’s an unfinished demo of part of a spinoff VN based on another unfinished VN. Only 1/3 routes are implemented and even that one is missing its event graphics. The unfiltered photo backgrounds are distracting and don’t fit with the cartoony look of the sprites. I hate the character designs; they all look like they came from the weaponized chin and pointy ears factory.

Amity is a Death Rule spinoff, and there are quite a lot of references to the original, but none of them really necessary for the story. The pointless callbacks just make this VN less appealing for anyone not already emotionally invested in Death Rule. Maybe the connection will actually matter in the other two routes..?

Story: Girl and her teacher fall in love after he starts giving her lengthy private tutoring sessions in an empty classroom. I can see how the setup could lead to romance, but I don’t buy how it’s written in Amity. What do they even see in each other? Most of the VN is fairly realistic and serious, except for one small segment where the main character is suddenly strapped into a torture chair by another teacher and quizzed on world history. Every wrong answer triggers a painful electric shock. Is adding random quizzes now a thing? This isn’t the first time I’ve encountered one.

Amity feels almost like a trick to get people to play a teaser demo by calling it a NaNoRenO release. 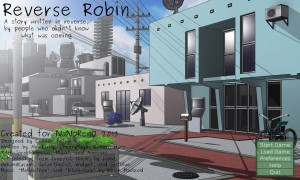 genre experimental
creator Funnyguts et al.
website http://lemmasoft.renai.us/forums/viewtopic.php?f=11&t=20143
summary When something describes itself as 'almost coherent', you know you're in for a treat.

Some silly writing collaboration project. "A story written in reverse, by people who didn’t know what was coming." It’s hard to understand for little payoff. The introductory text in the VN calls the result almost coherent and even that’s being pretty generous. It’s nearly impossible to even keep track of all the characters; something which is made worse by sprite-less characters and a constant shuffling around of sprites between all the others. Nonsensical can be funny, incomprehensible is just tiresome and frustrating.