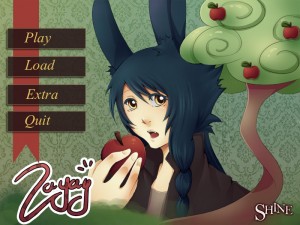 Zayay likes to give the player lots of choices to make, but never ones that actually matter. It constantly asks you how you feel about everything and occasionally, just to change things up, lets you take your pick from a menu of blind options. All this interactivity never really goes anywhere — you never really get more than a slight variant of a mandatory scene. Replaying in order to get all the endings becomes even more of a massive pain due to a ‘random response’ feature. It wreaks havoc on the "skip read text only" functionality by insert random (and therefore usually unread) text everywhere.

The extras screen doesn’t unlock until you’ve obtained all endings, but there’s no way to see which endings you’ve got or even how many there are in total. With so many decision points, finding all the endings sounds like a daunting task. As it turns out, all that matters is the final choice and a hidden ‘naivety’ stat. The stat requirement is strict enough that you can miss it, even when purposefully acting as naive as possible. Luck with random events helps and sometimes making the ‘wrong’ decision grants you more points in the end (+5 vs +0/+5/+5). Anyway, all the endings are basically the same thing and the amount of fucks I give about the unlocked ‘extras’ can be counted on zero hands.

Zayay makes one fatal assumption: that the player is attracted to the freaky bunny-demon dude with the unfortunate face. The plot consists of him dragging the amnesia-suffering player-character (who has no specified age/gender/species) around his demonic world for a ‘date’. He got on my nerves pretty fast, especially his incredibly irritating habit of asking pointless questions. I wanted to set him on fire and feed him to a pack of wild boars more than I ever wanted to hang out with him. Nothing that happens ever goes anywhere — even the big plot twist at the end basically boils down to "he’s a demon".

Backgrounds have bits of movement, but make excessive use of flat-shaded geometric shapes. A crossdressing sprite for bunny boy was more important I guess. Not poorly made, but the choices and branching and dialogue all made me want to punch babies.

Days of the Divine 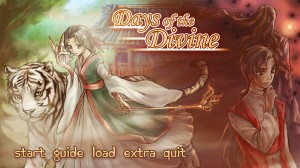 Shrine maiden Biyu finds out the cause of the ever-present memory-erasing fog that has been plaguing her village and perhaps gets to romance some local deities in the process. Days of the Divine tries to cram a relatively complex fantasy plot into a two-hour, three-route VN. It has mystery, it has romance, it even has lots of action — frankly, it has too much going on for its length. The romance parts feel very much tacked on, only turning from friendship to romantic feelings during the epilogue, and much of the setting ends up feeling underdeveloped or rushed. It’s still a pleasant read and the characters are lots of fun; particularly crazy drunk grandpa, and a literal god living in Biyu’s basement (yep, he’s romanceable).

It’s very pretty, especially for a NaNoRenO release. The high screen resolution (1920×1080) is used to the fullest with a coloring style featuring lots of texture paint and visible brush strokes. All the main characters have multiple poses and pose changes combined with small bits of movement which really help bring the characters to life. Backgrounds aren’t quite as good, but any problematic bits are masked with every trick in the book including an ever-present (and plot demanded) animated fog. An unfortunate side-effect of writing in perma-fog is how washed out it makes everything look. Small cut-in graphics take the place of event CG. They’re surprisingly detailed and work quite well as a cheap replacement. Some scenes that could’ve really used a cut-in or CG don’t have one, like for example the ending of each route. The soundtrack is my favorite of any NaNoRenO release so far.

Disclaimer: Days of the Divine uses my engine and I’m on friendly terms with the dev team. 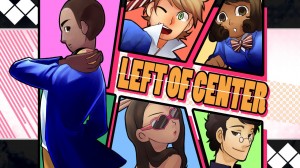 Garret just transferred to a new school, Outré Academy, where everyone’s kind of a weirdo. He was actually supposed to transfer to another school with a similar name, but he herped a derp so to speak and didn’t realize the mix up until his arrival. Transferring to the correct school will take 4 days, providing a convenient time limit for the story. Garret spends his remaining time at Outré hanging out with two wacky classmates. Will he end up liking Outré so much he wants to stay? Spoiler: yes.

The unique art style compensates in part for the not-particularly-unique high school romcom underpinnings. Random gags alone aren’t enough to last through the entire run time and when those start growing stale about halfway through, there’s not enough story to take over. Choices like "go to character A/B/C" and a rigid day-to-day schedule make things feel mechanical. There are three ‘routes’, each focusing on a different character, that produce a couple of unique scenes in-between the main plot. Regardless of who you hang out with, the end stays more or less the same.

Poses and exaggerated facial expressions (fitting with the art style), give the characters a lot of personality. For some bizarre reason entirely unclear to me, sprite fade-ins are excruciatingly slow. They don’t even speed up while skipping, which is possibly even more annoying. Backgrounds are 3D renders of varying quality — particularly the lighting/shading drops in quality at random. Some plants are clearly billboards and they even cast a billboard shadow. The music is fittingly upbeat and slightly strange. Frequent moments of silence where the background music stops entirely are an odd fit for this VN. Silence works for serious realism time, not wacky cartoon hijinks. I also encountered a number of bugs, despite delaying my review to wait for a post-deadline bug fix build — three separate script errors, and twice a sprite stayed partially faded-in for an extended period of time. 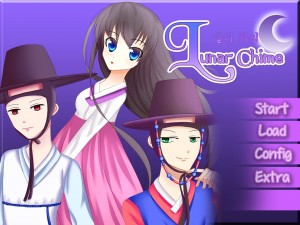 A Korean girl (Joo-Eun) does the unthinkable and opens a book while at the library. She’s punished for her horrible crime by being magically transported to ancient times. Her male ‘friend’ who was in the library with her, got sucked through the same time warp. Joo-Eun never actually sees anything happen to her friend, at one point she just seems to magically know… somehow. Anyway, being the protagonist it’s up to her to find/save him. Luckily, she doesn’t seem bothered in the slightest by the whole traveling back in time business and quickly finds a place to stay for free.

After struggling to get my way past bad end #7 where Joo-eun is pushed from a cliff, it only led me to another (non-numbered) bad end. Lunar Chime is in fact a demo — one containing just these two bad ends. Why the fuck is it called ending #7 if there are only two?!

The side-image is hilariously oversized — it consumes nearly half the textbox and is even bigger than the actual sprites. Joo-Eun’s gigantic noggin doesn’t exactly help things in that aspect either. Maybe it’s because I’m not used to it, but those old-timey Korean clothes are not a good look for the men. I’d complain about how eye-searingly purple everything is, but the screenshots make that abundantly clear. Some of the background music appears to ripped off and several other tracks are either very short and/or suffer from depressingly poor audio quality. 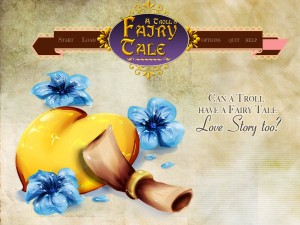 Troll girl Acacia, the only ‘troll’ in this VN who looks anywhere near troll-like, is nearing the ripe old age of 25. Her violent behavior and a tendency to get into fights are said to be the reason for her lack of quality suitors. You’d assume being aggressive wouldn’t be a big deal for most trolls, but then again; the trolls in this VN aren’t particularly troll-like. Her mother forces her to go to the yearly "meet and greet", where singles gather in search of a mate.

In one route, her presence at the meet and greet results in two potential love interests: bad boy fairy Edavine, and the pathetic but sweet troll Aeron. Why they date outside their species is a mystery to me, although aside from being able to fly, trolls and fairies look and act exactly the same. Edavine starts off as kind of an asshole, demonstrating in words and action his mastery of ‘negging’ (which he calls flirting). Aeron on the other hand has a spine seemingly made of jello, but gradually reveals himself to be a giant douche. It’s a simple reversal, the bad boy turns out to have a heart of gold and the shy guy reveals himself to be just another manipulative asshole. Acacia too isn’t who she superficially seems, for underneath her violent exterior is a gooey center filled with princess-dreams and swooning.

Based on a single irrelevant choice early on, you can also end up in an entirely different route (the entire VN has like 3 choices). In this route, Acacia circles around unicorn prince Damien/Damine (the spelling switches back and forth randomly). Needless to say, he looks nothing like a unicorn. In fact, he looks and acts much like Edavine, including having a weird leaning pose for his sprite. Most of Damien’s route consists of him acting smarmy and Acacia being in doubt whether or not he truly likes her.

Too often, the plot has to be moved forward by either excessive coincidence (people overhearing things) or by Acacia acting like a complete moron. The end of the Aeron/Edavine route in particular reduces her to weak-willed buffoon. I also wish this VN wasn’t so bloody long. Adding the two routes together, A Troll’s Fairy Tale is possibly the beefiest NaNoRenO project of all time, clocking in at well over 3 hours. There simply isn’t enough to the story to justify it being that long.

Sadly, there’s only a single pose per sprite with little other graphical variation. As a consequence, the visuals grow stale rather quickly. Aside from a single CG at the end of each route, no cut-ins or special-purpose sprites are used either — not even when the story clearly demands it (like when Aeron is punched in the face). Some of the forest backgrounds are quite nice… the other backgrounds not so much.