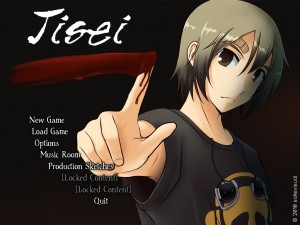 Many moons ago (disclaimer: not really that long ago), I played/reviewed the demo version of Jisei. Not terribly impressed, I never bothered with the full version… until someone gifted me a copy.

The biggest thing that stands out about Jisei (aside from the voice acting) is really just how short and limited it is. Everything takes places within the confines of a small coffee shop (think 3 backgrounds) and a full playthrough takes maybe an hour to complete.

Gameplay-wise, the constant trips between suspects and Gurski get really tedious after a while. Later in the game, you’re required to randomly use the examine room function (on previously examined rooms) and/or go to the men’s room in order to move the plot forward. The number of possible actions is so small you’re bound to randomly find the correct one, but there ought to be some sort of hint if the plot continuation trigger is illogical like that.

In the end, Jisei is a story about some bland kid with magical powers who solves a closed-room murder after being implausibly shoved into the role of detective. He uses his powers at one point, but doesn’t learn anything not easily deduced through other means. The gameplay parts add very little to the experience. Jisei seems closer to a NaNoRenO release with tacked on voice acting than a commercial release.