Re:Set Ep 1: Thief of all Hearts 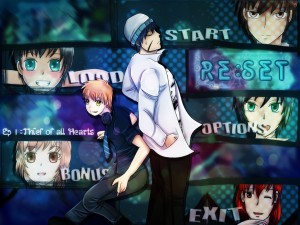 genre supernatural mystery
creator azureXtwilight
website http://mementomori.vnovel.com/released-games/reset-ep-1-thief-of-all-hearts
summary Michelle 'Mike' Vinson opens a box full of demons and only she can seal them back in.

Re:Set Ep 1 is kind of an odd release. It’s a remake of the first chapter of an episodic series that was put on hold after two episodes. I actually read the second episode back when it came out during NaNoRenO 2012, but never got around to reading the first part. This remake seems to make some major changes, adding in both investigation parts as well as SRPG gameplay.

A long time ago, an old sorcerer was lonely so he created seven homunculi to keep him company. The evils of the world corrupted his ‘children’, turning them into demonic personifications of the seven cardinal sins (just roll with it). With the last of his powers, the sorcerer managed to seal his creations into a magical puzzle box. Many years later, Michelle ‘Mike’ Vinson receives the box as a present and opens it, releasing the ‘demons’ back into our world. She’s granted magical powers (not really used in this episode) and as “bearer of the box” becomes the only one capable of sealing the demons back in. If I were a demon, I’d try to kill ‘Mike’ there and then, yet she’s left unharmed. There’s bound to be some sort of reason why they don’t just murder her, but I don’t think it’s ever explained. Instead, she’s kidnapped by Sloth until a scarred amnesiac brawler named Gerald wanders in and saves her. Now, Mike and Gerald travel the world to find the demons and re-seal them.

With a setup like that, you’d expect every episode to start with Mike and Gerald arriving in a town, finding something suspicious and eventually fighting a demon. That sort of happens in this episode, but not quite in that way. Mike randomly decides the two of them should become part-time detectives to make some extra cash so they can eat gourmet food. Although yes, their side-job eventually leads them to one of their targets, Mike’s priorities seem somewhat skewed.

Re:Set feels much like two games Frankensteined together. One part is a detective adventure game, collecting clues and moving between locations. The other part is an SRPG, where you repeatedly fight groups of enemies on grid-based maps. My problem with this setup is that the two parts don’t feel like they belong in the same game — there’s basically zero interaction between the detective parts and the SRPG parts. The result feels unfocused and random.

Compared to the amount of text, there’s quite a lot of gameplay. So much in fact, that it starts to get in the way of the story. Gratuitous fights are shoehorned in to create more RPG battles and the repeated interruptions really drag down the pace. Another problem is that basically all action scenes are being replaced by SRPG fights. It’s like watching an action movie with all the action scenes replaced by clips of people playing Warhammer.

Everything else about Re:Set Ep 1 just feels very sloppy. Unfortunately worded sentences are depressingly common. In the original, Mike and Gerald started doing their detective work because they were running out of money, but in the remake apparently Mike is just a glutton. The start of the main story is also very disorienting as it skips from Mike and Gerald meeting to them being together in an unknown place at an unknown time. They seem to be idling in that town for some unknown reason, instead of actively trying to hunt down demons like they’re supposed to.

The premise of Re:Set requires a lot of handwaving to get to the point where the plot starts to function. It’s a bunch of nonsense meant to facilitate a normal teenage girl fighting demons together with troubled-past amnesiac man, but without the accompanying crazy over the top fight scenes, there’s little payoff for accepting all the dubious bits.

Gerald’s pose reminds me of Cornholio.

The adventure game parts are all your standard stuff: moving between locations, talking to people, searching for clues and then presenting them… It all works, but it’s also pretty limited. There are only a couple of locations and rarely do you have a concrete lead to follow. Talking to people gives you the opportunity to present clues which can be a gigantic pain due to an extremely unwieldy interface.

The inclusion of SRPG battles is perhaps more notable, but they’re really, really basic. Every map is just the same square grid of flat terrain and ‘strategy’ consists of spamming your strongest attacks until you win. A lack of variation makes the battles very tedious, very quickly. Gameplay is simple enough to figure out without a tutorial, but that doesn’t mean throwing the player into a fight without any sort of explanation or warning is a good idea. When starting a new game, there’s at least the option to activate ‘Story Mode’ which gives you an auto-win attack so you don’t have to fight.

As I mentioned earlier, I really don’t like the effects these battles have on the story. I feel cheated out of some totally bonkers fight scenes that otherwise probably would’ve existed. Another thing that probably wouldn’t have happened in a standard visual novel, or at least I hope so, is the inclusion of random side characters in the demon fights. Occasionally some side characters join you in battle at which point they spontaneously gain magical demon slaying powers. When random guy’s girlfriend and some little kid are fighting demons head-on with weapons and magic, that’s just wrong on so many levels.

Someone clearly tried to thoroughly customize the user interface. Too bad they seem to be allergic to any sort of polish. The textbox moves around depending on whether or not there’s a name displayed, GUI elements often overlap or go out of bounds, the default button color scheme is equal parts unreadable and hideous. Battle sprites are animated (good), but the animations aren’t aligned very well, causing the sprite’s position to jitter all over the place. The battle screen grid is drawn in top of some random filtered photo in a way that looks nothing like proper terrain.

Backgrounds are photos with some kind of horrible liquid plastic filter applied. Most photos work fine, although some of the town backgrounds are very clearly not from the same place (one background is an old west style town with a saloon). Sprites blink and have mouth flaps which I don’t personally much care for, but I’m sure someone likes them. One problem with mouth flaps is that they don’t really work when the text speed is set to max.

The investigations part lets you click hotspots on the background and for once someone using Ren’Py has actually bothered to make the selectable areas light up when hovered. The interface for presenting clues on the other hand is just awful. Presenting clues to people is super clunky because you can only see one clue at a time which makes browsing through your available clues a giant pain.

Re:Set Ep 1 has some luxuries not commonly seen in freeware titles. It has a pretty decent opening movie and the battle scenes have a few lines of voice acting. Too bad both of those aren’t immune to the overall sloppiness of the presentation. The OP movie is the wrong aspect ratio, resulting in black borders on all four sides and the voice acting is completely drowned out by the background music.

It cuts out the parts I liked in the original (fight scenes) and instead crams in too much bland gameplay, stretching out what could’ve been decent with generic padding. The style of writing can be tiresome to read and as a whole this game is gravely missing some extra polish.