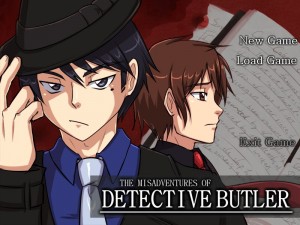 Gilligan Golder is invited on a cruise by his father, Galvano, to celebrate the success of dad’s insurance company. The two of them have grown apart after the untimely death of Gilligan’s mother. His father also invited some high-level people from his company to come with them on the cruise: Eliza Jones, Blythe Calico and Howard Iujuan. Unbeknownst to Gilligan, Galvano plans to announce his successor during the cruise. When Galvano goes missing and is later found murdered, everyone is a suspect.

One thing this VN doesn’t have a shortage of is Umineko references. Most of these are just superficial stylistic choices and don’t matter much, but the sheer quantity of them can be very distracting. Main characters Gilligan and detective Butler are basically two different sides of Umineko’s Battler. Interestingly, the story is told through Gilligan’s perspective even though it’s Butler who solves all the mysteries, sometimes through exceedingly improbably reasoning.

The prose is decent enough, but the mystery aspect has some major problems. By far the largest is that the killer is immediately clear from the moment Galvano’s body is found. It’s very reminiscent of the first murder in Dangan Ronpa, with the identity of the killer trivially deducible through a dying message left by the victim. The big difference is, in Dangan Ronpa that was just the tutorial chapter, while here it’s the murder around which the entire VN is based. Knowing the identity of the culprit really takes the tension out of things.

For a mystery story there are quite a lot of obvious plot holes. For example, at one point Gilligan finds some extremely incriminating documents just lying in a room somewhere. Another notable oversight is related to solving the ‘closed room’ in which the victim is found. Gilligan happily declares it a closed room, but forgets to check for other ways to enter (there are) and blindly assumes there’s only one key. This misunderstanding is not resolved through deduction, but rather by someone suddenly volunteering critical information. This type of plot progression is a recurring problem and it discourages the reader from thinking along.

A murder mystery where the culprit is known may sound like the most boring thing in the world, but surprisingly it isn’t. The pacing is tight and because things keep moving along at a steady pace, looking past various logic holes is much more doable. One particular scene is very hard to ignore though. Shortly after Galvano is found dead, Gilligan goes into a spiral of self-pity that borders on the theatrical. There’s quite the contrast between his sudden opera-esque “woe is me, life is a cruel mistress, time to throw myself overboard” shtick and pretty much everything else in an otherwise fairly lighthearted story.

Although the character designs are distinctive enough, the executives from Galvano’s company look a lot younger than they’re implied to be. Galvano himself keeps talking about retiring, yet he doesn’t look a day over 40. Blythe has different-colored sleeves that make it look like she has robot arms, although that’s more of a fashion critique than a real problem with the VN. Howard kinda looks like a leprechaun.

In one of the many stylistic nods to Umineko, characters do this weird head tilt where their skull rotates but their neck and body remain entirely static. Backgrounds are filtered photos, but there are at least lots of them and they’re filtered consistently. Some slightly unfortunate camera angles are unavoidable, but for photo backgrounds they’ve done a pretty good job.

The opening movie continues the trend of being needlessly similar to Umineko. It mimics the panning over sprites in a faux 3D room, but doesn’t do it nearly as well. The video doesn’t try to tell a story or set a mood, it just directionlessly pans back and forth over the cast.

I’m not sure what insanity would drive someone to voluntarily make a new VN with ONscripter, but at least it’s a functional engine. For an (O)Nscripter VN, it’s actually quite well made with an extensive menu system, CG gallery, tips screen, etc. Too bad they kept the ugly as sin default font and continue indicator.

Despite all the problems, it’s still fairly entertaining to read through. The constant Umineko references are distracting and do more harm than good. Giving the killer away isn’t the best way to start a murder mystery and parts don’t quite make sense, but good pacing and polish make up for a lot.