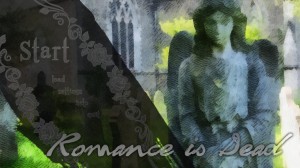 Romance is Dead opens with its main character, Maddie, waxing poetically about her love life and how she just broke up with her boyfriend. That’s all fine and dandy, but it has almost nothing to do with the rest of the VN. Maddie’s old boyfriend is irrelevant and her self-described disillusionment with romance barely plays any part. The actual main plot is kick-started when Maddie bumps into an amnesiac 1950’s greaser type (Adam) who keeps following her around. She eventually decides to help him find out where he came from, meeting a ghost (Don) and vampire (Maurice) in the process.

Although Adam’s is very much the main route, the other two guys each have their own endings. In my first playthrough, I tried to be realistically cautious and for some odd reason that pushed me into Don’s route. It was rather jarring when suddenly some side character started rattling off his life story and Adam’s problems were pretty much forgotten instantly.

Maddie is unbelievably stupid with respect to Adam’s origins. She’s described as a studious university student, which makes her dull wit that much harder to accept. The guy looks like he just stepped right out of Grease and she doesn’t question it. There’s also the issue of why his body/clothes haven’t decayed if we are to believe he’s a half-century-old zombie, but I’m afraid the answer can only be magic.. Some of Maddie’s other behavior is odd as well. For example when a strange man breaks into her bedroom, she treats him like an annoying relative rather than a dangerous crazy person.

As with the other VNs by this writer (The Dreaming / ADRIFT), some of the endings can be really obnoxious to get. For one, there’s no way to figure out how many endings there are or how many you’ve obtained. Differences in events between branches are not adequately explained by different choices taken unless you have a doctorate in reverse moon logic. The choices themselves are kind of boring, with the majority just giving you the decision between being helpful or cautious around each character.

I can’t stand the art style of the sprites. They’re proportioned like Mr. Mackey and the yellow-tinted eyes make it seem as though the entire cast is suffering from Jaundice. Adam in particular looks like he’s about to float away from an excessive case of balloon head.

The filtered photo backgrounds on the other hand, I’m fine with. They’re made to look like rough sketches and are at least good enough not to be a distraction. Stylistically, they don’t match the sprites, but considering my feeling about those I can’t really complain. Occasionally, sprites are used in a way that doesn’t match the chosen backgrounds or accompanying text — mostly Maddie standing upright in the middle of a room when she’s supposed to be sitting at a desk.

While the title screen doesn’t give the best impression (no background music and the ‘help’ option is broken), the rest of the presentation is perfectly fine. I found the music a little boring and sometimes repetitive, but not distractingly so. The main text font scores an ‘irritating’ on the readability scale, but for a short VN it’s tolerable. The textbox itself blinks in and out of existence every time a sprite changes expressions, which is another point of annoyance.

The main plot relies on Maddie being an idiot and the branching is often illogical. Going into the routes of secondary characters feels unnatural due to the common route focus on Adam and lack of resolution for his plot thread.

2 thoughts on “[review] Romance is Dead”