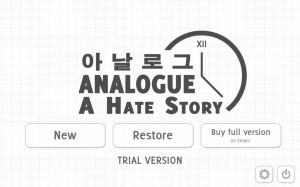 Holy fuck it’s on Steam. Does that mean they accept visual novels now, or is Analogue just that good? When it first came out, I tried out the demo for a few minutes but it didn’t really grip me. Perhaps it’s worth a second look…

You are someone from the future. You aren’t told anything about yourself or the state of the universe (which is rather inconvenient when you’re asked about the state of earth later). You’re ordered by someone (let’s just say the setting isn’t well-explained) to investigate a drifting multi-generational space ship. Entering the ship, you’re greeted by a command-line interface — one of the VN’s points of token interactivity where you slap some widgets or diddle some doodads. It’s not a minigame, you just type in some incantations. This activates the ship’s AI: *Hyun-ae. She’s not particularly concerned with the state of the ship or that some unknown person is trying to access its data.

The majority of Analogue is spent reading diary entries from the ship’s former inhabitants (of course they all keep a diary). Every once in a while *Hyun-ae needs to be poked to get a new batch. Most of the entries aren’t particularly interesting and the fragmented storytelling gets old fast.

Once in a while, *Hyun-ae will offer her opinion (strange for an AI) on the log entries. She acts like a spoiled child and throws a fit when you don’t answer her questions the way she likes (is that normal for an AI made in 24XX?).

The story told through the log entries gives insight in the society aboard the ship — In the time span of 300 years, their twenty-fifth century society has changed into a replica of historic Korea.

The remaining part of the demo focuses on the treatment of women in this replica of a historical Korean society (and *Hyun-ae complaining about it). Apparently that’s what’s most important here…

The sprite (singular, there’s only one in the demo) looks pretty good. She has multiple poses and expressions at least. There are no backgrounds to speak of. The total amount of art seems more appropriate for a NaNoRenO release than a commercial title.

The background music is all right, though a bit repetitive. Especially one track early in the VN that sounds about five seconds long.

The user interface looks nice and functions decently. The transition fade when switching pages is annoyingly slow and the user interface is unresponsive while it lasts. The diary entries are paginated instead of scrollable requiring an uncomfortable amount of mouse movement.

Analogue isn’t a bad VN, but its quality lies primarily in its game design. The flashes of interactivity and the fragmented storytelling are precisely timed to distract you from the relative tedium of the main plot. Some interesting questions arise, but they are never explored.