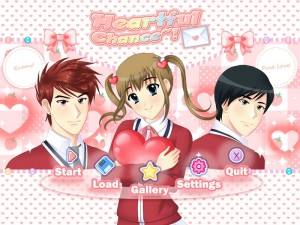 Yo dawg, I heard you like compressed archives so I put a self-extracting installer inside your .zip download so you can extract while you unzip. But seriously, why is the download a .zip containing the real installer?

Eimi is a hyperactive girl who gets pressured by her friend Charlotte into writing a love letter to Charlotte’s crush in Charlotte’s name. While attempting to secretly put the love letter in the guy’s locker, Eimi meets Kouhei whom she falls in love with at first sight. The delivered love letter works marvelously and Eimi becomes known within the school as the love letter princess. The plot thickens when Kouhei asks Eimi to write a love letter for him.

So far, so shoujo. From this point on the plot gradually splits into two routes. Will Eimi be able to conquer Kouhei’s heart, or will her affections shift to ‘bad boy’ Henri. Class-skipping, ear ring wearing, tree sitting — Henri is clearly a delinquent. Where did the delinquents-like-sitting-in-trees thing come from anyway?

The grammar in Heartful Chance! is pretty bad. Still readable, but you’re subjected to a near constant barrage of awkwardly-worded sentences. At least it crosses over into funny bad sometimes.

The plot is predictable, lighthearted and completely silly. Characters act comically over the top, especially Eimi. She occasionally goes into full-power stalker fan girl mode, going so far as to set Kouhei’s picture as her desktop background (the evening after they first meet). Kouhei and Henri by contrast, act completely normal…

As soon as you start up the VN for the first time, the opening movie starts playing. It’s a traditional opening that introduces the characters and teases some of the plot. What I found very peculiar is the way some animated objects seem to jitter from one frame to the next, similar to the way stop-motion video shakes. I’m not sure if it’s just a really bad encode, or if it’s actually animated that way. Also, what’s up with the split-screen shot of Eimi looking appalled and Kouhei smiling. That looks so very, very wrong.

Characters change expressions, but not poses or outfits. The facial expressions are ridiculously over the top which matches the writing. Eimi and Charlotte have incredibly thick bottom eyelashes that give the appearance of them having bags under their eyes. It just makes them look haggard.

There’s a high number of backgrounds for such a short VN. This comes at the price of quality — the line art is simplistic and very angular, coloring makes excessive use of gradients and texture paint. Heartful Chance isn’t stingy with the number of event CG either, with multiple images for each love interest. In addition, there are a handful comedic cut-in images using chibified characters.

The user interface can best be described ‘kawaii as fuck’. Everything’s pink with polka dots and strawberry motifs. Even the text is pink. Sometimes the text flows outside the text box on the sides (should really have been spotted prior to release).

Heartful Chance is cliched and kind of stupid, but it’s also completely silly and rarely takes itself seriously. If you can suffer through the awkward grammar (or even better; find enjoyment in it) and turn your brain off for an hour, it’s actually pretty enjoyable.