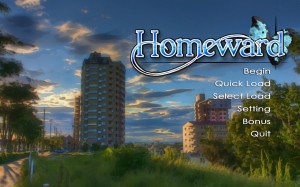 Riku Saionji moved all over the world with his dad after his parents divorced, leaving behind his mother and Sora, his younger sister. When mom becomes hospitalized, they return to Japan and Sora moves in with them. This kicks off a traditional slice of life high school romance story with three love interests: Nonami, Haruka and Sora.

Nonami is a goofy, always energetic Kendo club member. She’s also Riku’s childhood friend from when he lived in Japan ten years ago. She has loved Riku all this time, blah, blah, etc. you know the drill. Haruko is miss perfect, class representative and a cooking club member. The jealous tsundere slot is filled by Sora.

The story is divided into two acts, part one acting as the common route and act two branching out into a different direction for each character. The common route covers cherry blossom viewing, a trip to Seattle during golden week, a sports festival, beach trip and the school’s cultural festival. Stereotypical school life stuff, really. All three girls are present for each of these, even the trip to Seattle. The tone stays very lighthearted and there’s a lot of slapstick comedy. Too bad most of the ‘humor’ consists of people falling on top of each other, accidental gropings, etc. The first time you get to do anything date-like is the dance at the end of the cultural festival. Shortly afterwards the common route ends.

The writing is pleasant to read, although it can get a little too flowery at times. There are a few typos here and there, but nothing major. One point of annoyance is the gratuitous use of Japanese without explanation or translation. Normal people wouldn’t know what iinchou/keion/NEET mean, even manga/anime fans will likely have to look up a few words. There’s also a tendency to use the Japanese versions of huh/hey/uhm, and such remarks.

The second act begins with a dramatic twist (Riku has to move back to America) that’s the base conflict for each of the character routes. This causes the routes to feel too similar to each other, especially Nonami and Haruka’s routes. No matter the route, it involves a lot of Riku wallowing in self-pity and being pathetic.

The Nonami and Haruka routes are very similar. After hearing he has to go back to the States, Riku becomes a worthless sack of shit. In Nonami’s route, Riku has trouble telling her he’s leaving and lies to her face they’ll always be together. He then cheats on her with Haruka.. In Haruka’s route she doesn’t have time to meet Riku for several days. He then cheats on her with Nonami. When they confess what happened, Haruka collapses from exhaustion. Turns out, she was frantically trying to get into the same American university as Riku so they could be together. Haruka then apologizes to Riku for what happened. RAAAARRGGGHHH. Riku is a gigantic douche to the point where I wanted bad things to happen to him.

The Sora route is the most interesting. Riku and Sora elope and camp out in the mountains for a night before attempting suicide by jumping off a mountain (society won’t allow for their relationship, boo hoo). They decide not do go through with it at the very last moment. Riku, master of good timing, thinks now is a good time to tell Sora she’s adopted, lolwut. Maybe you should have told that earlier you damn moron!

The opening video is very traditional, consisting mainly of camera pans over existing art accompanied by some dramatic text. I have no real complaints about its artistic merits. However, the video has interlacing artifacts and every second or so skips several frames.

Filtered photos are used for the backgrounds. Both quality and quantity of the photos is good, and the filtering looks nice. Background transitions are all wipe to black or dissolves which can get a bit boring. The sprites are a tad on the simplistic side, but the characters have a good number of poses and expressions. On the event CGs the character art is of significantly lower quality (comparable to Katawa Shoujo) with the backgrounds consisting mainly of the same filtered photos as the rest of the VN. There are quite a few event graphics (especially for something free), so some drop in quality can be overlooked.

There are snow/rain effects that almost look good. The raindrops are oddly short and bright white and the snow movement is strangely jittery (the image positions appear to be rounded to the nearest whole pixel). Scenes with background animations (snow/rain/camera pan) have an unfortunate tendency to stutter when a new sprite is shown.

Music and sound effects are a weak point. Sound effects are mostly absent, often we’re told about a sound in the text but we don’t get to hear it for ourselves. The soundtrack consists of stock music, a number of which I’ve heard before. The music selection relies heavily on melancholic piano pieces, especially in the first half hour. These often feel too heavy for the accompanying scene, weakening their impact when they are needed. "Sad Farewell" (played during very emotional scenes), sounds distractingly much like the fairy fountain theme from Zelda.

The interface looks very nice, I have only minor complaints. The mouse over effects can be a bit too subtle, especially in the CG gallery and I also missed some type of click-to-continue indicator to show that the text has fully faded in.

Homeward doesn’t try to break any new grounds with its storytelling. It ticks all the checkboxes — romance, comedy, dramatic ending — but it gets most of the details wrong. The comedy doesn’t quite work, and the drama is fueled by an out-of-nowhere event made considerably worse by the protagonist acting like a complete fool. If you can get into the humor and/or live with the largely groan-worthy second act, Homeward is an attractive looking title with a good amount of content (6~8 hours).