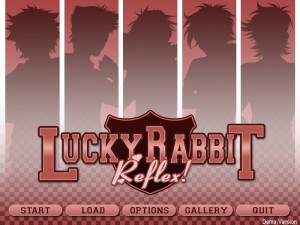 When the game starts, you’re asked to name your character. I named her "Nineties Chin" due to her extendo-cheek and curved chin reminiscent of such timeless anime as Saber Marionette J (how on earth did anyone ever think that shit looked good). 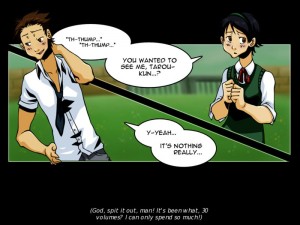 We meet the main character (Nineties) as she’s reading a shitty romance manga on her way to school. She misses her stop causing her to be late on the first day at her new school (such wacky hijinks). She’s so tired from biking (huh?) she falls asleep during the opening ceremony. Alternatively, you can choose to skip the opening ceremony rather than come in late. In that case a ladder falls on you.

Don’t try to read both scenes using Ren’Py’s built-in rollback mechanic, you can’t. It has been deliberately sabotaged not to roll back past choices. You’ll have to use regular save files. Why would anyone cripple rollback like that? Is it some misguided attempt at making the game harder?

After the introductory scenes, you’re suddenly presented with a screen containing stats and some buttons. I guess this is the sim part now. There’s no in-game tutorial, or help, or tooltips. Errr….. maybe there’s a manual included with the game? There is, but it’s only about hotkeys. Maybe the manual is only on the game’s website? Nope.

The activity buttons during the week are easy enough to figure out, but during the weekend you get a different set of options. The buttons lead to a mixed bag of weekend-ending activities and multi-level status screens. At least the activities have a tooltip explaining which stats they raise… Sure, you can mostly figure out what everything does by experimenting over the course of a few weeks, but why should you have to? Some things are also annoying to have to figure out on your own. For example the stress stat which seems to raise the likelihood of an activity failing (a widely hated gameplay mechanic), but what’s a high stress level and what’s low must be found out through tedious trial and error.

I realize I haven’t said much about the story, but there really isn’t much to say. If you cross out all the character X has hobby/attribute Y scenes there’s barely any plot at all. At the very end of the demo is its one single event — a halloween party. You even get to pick which costume to wear. Then finally, after a week of waiting, it’s time for the party. Alright, let’s g—– 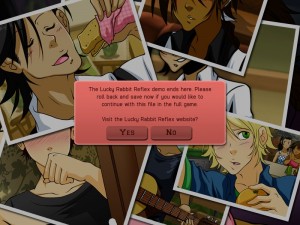 The character art looks awful. Freakish body proportions beyond human comprehension, and weird asymmetric melting skulls with mouths shoved to one side. Shading is done in two levels, the first being slightly darker than the surrounding area, the second is blacker than the deepest night. It may look decent in monochrome, but on colored sprites it looks like nonsensical splotches of black.

The backgrounds are some of the worst I’ve ever seen. Just look at them. Why the black borders? Why are they so ridiculously blurry? The game’s only a measly 800×600, but the backgrounds look drawn at an even lower resolution. I often complain about perspective goofs in backgrounds, but this is a whole new level of bad. And why is there a gingerbread house directly adjacent to the sports field?

I hate the art style used for the characters and the backgrounds are shamefully bad (especially for a commercial game). The sim part lacks any form of explanation and the demo ends even before the first event. Everything feels very amateurish and sloppy and I don’t like it.