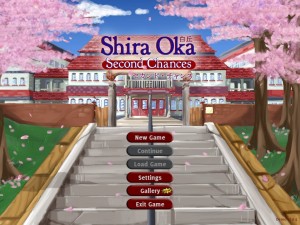 Disclaimer: I’ve never understood the appeal of dating sims — most of them are grind-fests with a second rate harem story sprinkled in between.

Shira Oka is a Japanese-style American developed commercial high school dating sim. After having been in development for years, it was finally released in late 2010. What sets it apart from the competition is the large amount of ‘polish’. It has animated sprite transitions, lots of backgrounds, some voice acting and even an animated opening video. It’s also a giant turd.

You play as Generic McLoser (name changeable), who blames his boring job and alcoholism on being dull in high school. Then you wake up and you’re back in high school. Not the high school you went to, since you don’t recognize anyone..? You’ve been brought back by Satsuko, the plot exposition Angel. She gives no reason why causality should be victim to your happiness, just roll with it. You get the usual character customization screens and Satsuko tells you to take a nap.

You wake up several days later and decide to go for a walk. You stumble across a classmate: genki girl Aya. She barely knows you, but nevertheless immediately forces you to take a magazine personality test in the middle of the road for no reason. Excellent writing. She apparently stole your phone when you dropped it at school — three weeks ago — but now she’s giving it back to you. No-one cares…

Over the course of the next few weeks you gradually get all your "grind stat X" activity buttons. On random days there are automatic events that introduce each of the 8 billion love interests. These events are very short and generic — the girls pretty much just mechanically mention their club/hobby. Meeting everyone takes two months all the while you’re blindly grinding random stats in the hope it’ll be of some use later.

Then, you get run over by a truck and die.

Your guardian angel warps you back to day 1, saving your life but clearing your gained stats… that you’ve just spent the last hour painstakingly grinding for. Are you fucking kidding me? Fuck you game, fuck you.

The sprites and backgrounds both look ok. Not particularly good, but not shamefully bad either. The sprites blink and they have a mouth flap animation while talking. The eyes are sometimes misaligned, and some mouth images have a pixel of black color bleed at one edge. The mouth flaps are also way too fast (unless they’re all channeling Scatman John). When sprites change poses there’s a short animation which is pretty cool. It unfortunately does go pretty far off model a lot of the time (as do some sprite poses).

The music sounds like cheap MIDI stuff. Like you’d expect, really. But what you’d probably not expect is the voice acting. Most characters have at least a line spoken out loud. The voice acting quality is unremarkable, though there isn’t really enough of it to say much.

The gameplay is shit. You’re blindly grinding stats without any goal or motivation. It doesn’t get much better than grinding ‘literature’ to ‘get’ literature girl or something. There doesn’t appear to be any specific deadline or event to work towards. Oh, and enter randomly stops working as a way to continue the text sometimes.

The great majority of your "game time" is spent pressing the same activity button(s) over and over again and watching the same simplistic animation. You have to watch the same animation for every single day of the week, every week with no way to skip it. It’s a good thing you can’t actually die of boredom, but I strongly recommend removing sharp objects from the room before playing.

Your time is better spent staring at decomposing roadkill.