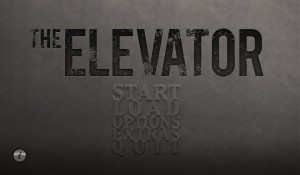 The Elevator follows the daily life of David Carmichael, a middle-aged private investigator living several hundred years in the future. Sprinkled throughout the story are (unprovoked) flashbacks of the traumatic case that made David quit the police force over a decade ago. Unsurprisingly David’s current case turns out to be related to the "South Shore" killings from all those years ago. That’s a problem with this VN; it’s too short (under 10k words) to do things subtly.

Similarly, during his daily 20 minute elevator commute (worlds slowest elevator) to his office on the 78th floor David suspiciously often shares an elevator with the same young woman. David’s partner Jonathan seems strangely obsessed with this "Elevator girl". What’s also odd is that somehow Jon has never seen this girl, even though David seems to run into her every day. Elevator girl Elena is also the only character to have a sprite. So yeah…

The foreshadowing in The Elevator can be more accurately described as loudly shouting what’s going to happen. Once you figure it out, you’re just waiting for David to realize as well. Once he does, the VN suddenly ends right there and then. Well, almost — Elena magically appears into David’s office (there’s no explanation for how she got in), turns off the light, then stabs him (the true ending stops right before the knife hits).

The writing itself was ok, but there are waaaaayyyy too many emdashes making some sections rather unpleasant to read. Similarly, commas often show up in places where they don’t make sense.

David’s office is the only place with a somewhat detailed background image. The lines are very wobbly and the perspective makes no sense. There are two sprites: one for David (only a small side image), and one for Elena (the only character to have a proper sprite). Jonathan has no sprite.

The somewhat rough, painted style of the sprites matches the atmosphere of the story. Elena’s smile creeps me out; she looks more gleeful than amused. The male character horse-face that’s present in other Cyanide Tea’s releases isn’t as prominent. David is a relatively mild case, and the style looks much more appropriate on a middle-aged detective than it does on a teenage bishounen. David’s side image seems to have had an unfortunate run-in with the killer from Kara no Shoujo — no arms.

The interface is significantly altered from the Ren’Py default. This change unfortunately removed the sliders for the text speed and replaced it with buttons for slow/fast/instant speed. The extra’s button on the title screen starts disabled, but looks the same as non-disabled buttons. The save/load screens have the common problem of being too subtly labelled. At least there’s a confirmation popup before overwriting a save file.

Too short to leave an impact, what little mystery exists is telegraphed too clearly in advance. Just as the story is finally getting interesting, it suddenly ends.