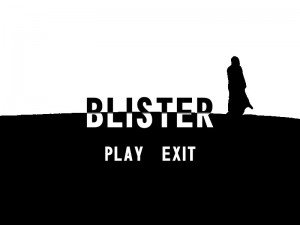 genre post-apocalyptic horror
creator Scope Games (clannadman)
website http://lemmasoft.renai.us/forums/viewtopic.php?f=11&t=15874
summary A story of the end of the world, based on a Lovecraft short story.

Upside-down crosses? These guys are hardcore

Based on the short story "Till A’the Seas" by H. P. Lovecraft and R. H. Barlow, Blister tells a tale of the end of the world. A steep rise in temperature has left most of the globe uninhabitable. Human population has dwindled down to a sliver of what it once was, most technology has been lost to mankind. Our (nameless) main character is a traveler, wandering aimlessly around the arid wastes. After losing his bearings he collapses out in the wilderness, but is saved by two youths wearing black cloaks. The two decide to take the traveler to an old storyteller, the only other human they know.

Is that the Chrysler building?

The old man (Ull) tells the story of how the world ended — knowledge now lost to the scant few remaining humans. He continues with a story of his own life.

The original short story Blister is based on consists of just the description of the disaster that struck the world, followed by the story of Ull. The part with the traveler and the storyteller was added for the VN.

Blister uses filtered photos for backgrounds. The selection of photos is pretty good, but they’re all filtered with a posterize effect which can get a bit boring. Most backgrounds are of desert-like landscapes on which posterize at least works reasonably well. The lack of detail fits the story, especially considering most of it is told by a narrator recollecting past events.

The sprites are stock art. They look a bit cheap due to white fringes and a lack of anti-aliasing around the edges. When the two ‘bandits’ who pick up the main character in the beginning take off their hoods, the way they look screams feudal Japan. The other art and music gives off a very middle-eastern feel, and the two kids stick out like a sore thumb.

I did not like the music…. at all. The one non-vocal track is alright, but the rest of the soundtrack consists mostly of monotonous nasal moans. The title screen music is especially grating. It fits the mood of the VN just fine, I just personally hate the way it sounds. Listening to the music with headphones is a surprisingly efficient way of getting a headache. There’s also a footstep sound effect that doesn’t sound quite right for the type of soil. The same sound effect is reused multiple times and for different characters.

A decent adaptation of a simple story. The music is what I’d put on if I wanted to annoy other people. Additions to the story made for the VN don’t add much, but don’t spoil or ruin anything either. At a modest 7k words, there are worse ways to spend your time. Worth a read if you’re interested by the setting.