Dance With Me In Wonderland 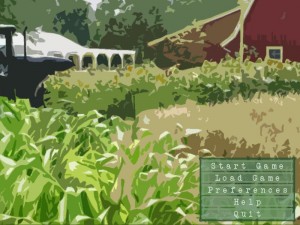 I can only guess what she’s holding.

Borinia is a young girl living in a place where slavery is still legal. After losing both her parents and then being abandoned by her aunt at age 12, she now works as a slave on a farm. Her owner, Aston Williamford (great name) treats her really well and blushes when they talk and oh crap he totally has a crush on her. When Borinia has a minor squabble with some other property, she starts crawling in her skin outside. Master Williamford stumbles on her and immediately invites her to stay the night in a guest room of the main house. Borinia offers him a photograph of bread as thanks (supposed to be some actual bread, but just look at it).

When Borinia wakes up she finds herself walking through a beautiful garden. She was magically transported to a fantasy/fairy tale world. This is not explained in the VN at all — she could have just woken up and taken a stroll in the gardens surrounding the main house.

Anyway, she’s mistaken for princess Inia, taken to the castle and forced to attend a ball. Borinia keeps saying she’s not the princess, even to the other guests. When Lucius Cedarwood, a guest at the ball, complains to the queen about the fake princess, he’s immediately thrown in jail and condemned to death. Harsh. Borinia immediately frees him from the worst-guarded dungeon of all time by taking a key from the sleeping guard.

The next morning, the queen asks Borinia if she was the one who released Lucius. She immediately admits to doing so (remember that the queen likes to condemn people to death). At precisely that moment, escaped criminal Lucius Cedarwood barges into the throne room. Does he have a death wish? Where are the guards? Lucius offers to marry Borinia as an apology. What?! And the queen accepts. What?!

This is where you get the only choice in the whole VN. Will Borinia marry Lucius and become queen of a country, or does she try to go back to doing slave labor on some farm? Choosing slave labor results in the better ending. What?!

Tiny, tiny hands and deformed arms. The men all have giant heads — their eyes are fleeing their faces in terror. Everyone has this really ugly looking gradient hair. Backgrounds are filtered photo’s, usually adequate although the throne room notably lacks a night variant for the ball.

There is no music.

Where does this obsession with living as a farm slave come from?