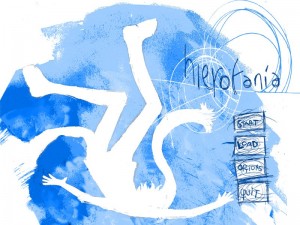 It has been ten years since god of justice Utrecht[1] disappeared. Since that time his clerics, the "Knights of Utrecht", have been unable to use their magic. As a consequence, the number of Utrecht’s followers has dwindled to near nothing and the knights have lost the respect of the people. Crocket is a knight in training based at "Utrecht’s Dusk" — the westernmost base for the knights of Utrecht.

One day, while Crocket is out chasing wolves away from the main road, two EllsMiralls acolytes (Douglas and Deedra) visit the remote base looking for a man they accuse of assassinating the princess. When the stranger later shows up, claiming to be able to prove his innocence, Crocket volunteers to escort him. Crocket is a girl btw, in case you didn’t know. The VN for some reason withholds that information for quite a while.

The stranger stays suspicious — he won’t say his real name, and hides his face on all his sprites. He’s also able to use magic, but a tracking spell placed on him would alert his pursuers if he does. Stranger refuses to answer any questions about him or his circumstances, outside of claiming the supposedly assassinated princess is being held in some nearby ruins. Within its decaying walls, some dark surprises await Crocket. I won’t spoil what will happen inside the ruins, but magic is still very much alive in the world of Hierofanía. Utrecht may not manifest anymore, but other sources of magic still exist — as do certain types of fantasy creates.

Characterization in this VN is quite good. The different characters, side characters included, have distinct and believable personalities. Douglas especially has a surprising amount of depth to his character. Crocket too gets some depth to her character over the course of the multiple routes, though her Amelia-like romanticized idea of being a warrior of justice stays dominant.

Route branching starts after you enter the ruins. The different endings are sufficiently distinct (though some surprising twists remain under-explained), and you generally get the feeling your choices matter. However, getting the true end (7) is unnecessarily hard to get. Free Douglas, don’t be his rival ("open coffin"), refuse his recruitment ("ridiculous question"), act like a hero ("knight to make things better" or look at your face in the mirror). Basically you unlock the true end by going through a specific character development scene that changes nothing, then at the very end of the VN one of the bad ends turns into the true end. There could’ve just been another choice at that point to determine the ending — taking away control from the player in this way is just being obtuse.

The art style admittedly takes some getting used to, but it matches the eerie, uncomfortable tone of the story. Sprites have multiple poses, even some of the minor characters, although certain poses can look a bit off-model.

There’s a good number of backgrounds as well. Rather simplistically drawn, but the texture paint and good choice of colors gives them character. The perspective is really wonky most of the time, but it feels like part of the style somehow. A handful event graphics are used, mostly during the opening and endings.

Background music mostly consists of moody tracks with a lot of string instruments. It works well for most scenes, but I felt like it’s missing a more fast-paced track for the action scenes.

User interface is a weak point for Hierofanía. The textbox background is a very ugly upscaled spiderweb motif and the font is slightly hard to read — not directly problematic, but tiresome. The broken text speed preference is certainly a lot more annoying; it doesn’t change the speed of spoken dialogue.

I think the weird art style may have kept a lot of people from trying it out, but Hierofania is quite a good VN. The setting is an interesting one, much darker than most VNs, and the characterization is pretty good. Some events, especially near the end, could have benefited from some additional exposition.