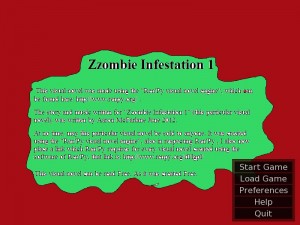 I don’t want to deprive you of the title screen’s full glory, so here you go. The text being anti-aliased to white — even though the background is green — fills me with fuzzy nostalgic flashbacks from grade school; only an 8-year-old would think that looks acceptable. The emphasis on the VN being not for sale is also a nice touch. You could have fooled me with such a professional looking titlescreen…

Well, let’s get started shall we.

Gee wiz, we have a wife. Too bad she doesn’t get any lines, a personality or even a name.

Notice how the above is all a single sentence. The writer, throughout the VN, demonstrates he doesn’t know the difference between a period and a comma. Does he just flip a coin or something? He also has an annoying habit of placing spaces before a comma, which annoys me far more than it probably should.

Returning to the story — the commotion doesn’t die down, so let’s open the curtain to see what’s going on.

I love the little aside, "eating Rick" — like it’s some small matter that our neighbor is currently being eaten by someone. Anyhow, let’s try to be a hero and save Rick.

Not the sharpest crayon in the box, are we?

It seems fist-fighting the zombies gets us eaten. What if we tried to flee with ‘wife’?

There’s a ‘good’ end, but it can only be reached by not opening the curtains in the beginning. In the good end, you hide inside the house. When your food supply runs out, you take a trip to the grocery store to get some more. Zombie infestation, his neighbors are all dead and he pops over to the shop to buy some food. 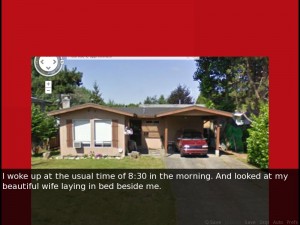