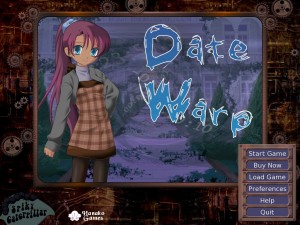 While on the way home from a first date, Janet and Bradley are stranded in the forest after their car breaks down. They stumble upon a house and ask to use the phone so they can call for help.

The house is inhabited by four handsome single men between the approximate ages of 16 and 24 (oh hi otome game). Their phone isn’t working either, but they graciously offer to let Janet and Bradley stay the night.

1 I have good reason for calling Linds a creep. He intentionally walks in on Janet while she’s changing clothes, admits it and stays to stare. Strangely, this event is never brought up again later.

The next day, when Bradley and Janet try to leave the house, their exit is blocked by a magical barrier. And then Date Warp’s promo video suddenly begins playing — it’s not really an OP video when it ends with a link to your website, is it? Also, please never rhyme dawn and beyond again, thank you.

Right, we were in the middle of something. Linds starts spouting some science-y stuff about the barrier being a plasma window (how can he tell?) and how they can’t get out through the windows either because the wires of the security system are overloaded. I really don’t see the problem here — don’t touch them, cut the wires or insulate them. Why not just write it such that the entire house is surrounded by a science-fantasy barrier?

Bradley decides this is a good time to go nuts and pull out a gun, demanding to see the basement. They manage to wrestle the gun away from him and put him in handcuffs. Wait, why do four bishounen living in a house together have handcuffs… oh, I see. Anyway, Bradley lays out the setup for the full version, and then the demo ends.

The way choices are handled is rather odd. You need to solve a pipedream-esque puzzle before being allowed to select each answer. The puzzles aren’t fun and as far as I can tell there’s no way to turn them off.

I’m really not sure what to think of Date Warp. The demo only sets up the characters. There’s supposed to be mystery solving in the full version, but none of that happens in the demo.

Immediately apparent is the giant brown border all around the screen. It looks bad and reminds me of old DOS games that had to use a large border to lower system requirements. The border isn’t really used for anything, it just contains the textbox and some quick-access buttons for menu options.

A relationship gauge shows up whenever one of the guys’ opinion of Janet changes. It bluntly reminds you that you’re playing a game, completely breaking immersion. There’s also no status screen where you can see the current value, you’ll just have to remember it or write it down.

Sprites have expressions, but no alternate poses. Janet is drawn in a completely different style from the rest of the cast almost as if she’s from a different VN. They’re from the same source of stock art, but they just don’t match.

There’s not much variety in backgrounds — everything takes place inside the house — but they’re well-made. Event graphics aren’t nearly as high in quality. Their backgrounds are hastily slapped together, and characters look significantly worse than their sprites. Showing side-images on top of the event graphics makes the drop in quality that much more noticeable.

The music is pretty good. If only the tracks weren’t so short (slightly over a minute). The song for the opening movie is super cheezy, and the lyrics are dumb. Near the end of the opening video are a bunch of event CG. They’re kinda crappy looking, so maybe that wasn’t the best idea.

The demo gives a representative sample of the graphics and music. Plot-wise, there’s enough text to be sure it wasn’t written by someone entirely inept. What it doesn’t tell is Janet’s role in the rest of the plot and how the mystery will be handled.