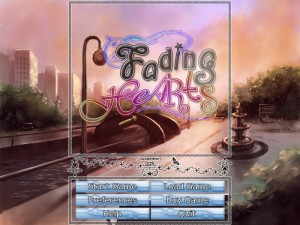 After a short explanation of how to play a visual novel we’re dropped into the story. Ryou is having tea with his two (female) friends, Claire and Rina. We get a short scene with some casual banter and on the way home, Rina confesses her undying love to Ryou. Too bad that, at this point, I know absolutely nothing about Rina, Ryou, their relationship or the world they live in.

I rejected her on my first playthrough, didn’t want to be locked into the route of the first girl I met. When Ryou returns home you’re presented with this screen: 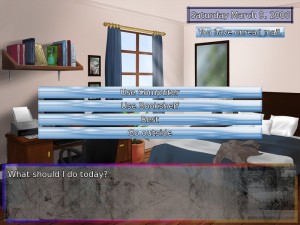 As you’d expect there’s no tutorial, manual or explanation.

Looks like I get to play another sim game. Anyway, I’ll just select some random action to do for today so I can get back to the plot and… 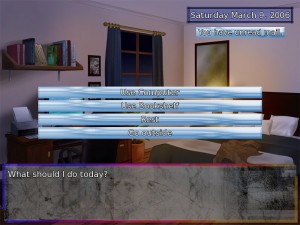 …I’m immediately presented with the same menu and the same dreaded question: "What should I do today?" Fine, I’ll just pick another random option. The day ends and morning comes, time for a fresh day full of: the same choice a third time…

After the third time you get a short blurb about Ryou’s finances and what the work option actually does. He’s a high school kid working part time from home as a programmer for a game company and a bank. Wha–? If you accepted Rina’s confession this is where you get a short date scene where she piles some plot exposition on you, but if you didn’t… same choice a fourth time.

That evening, Rina storms into Ryou’s room because she heard a bad rumor about Claire’s boyfriend. Ryou tries to find out more about this bad news boyfriend through annoying otaku male friend character Alex who spends his days in the maid café. Alex used to be in a notorious group of pickup artists named "Wings of Light" — what the hell is going on with this game? The Alex angle leads to nothing, and then the plot ends. Not the game, just the plot. From this point onwards, the only way to see Rina and Claire again is to call them up and ask them on dates (sorry, to ‘hang out’). You can spend your days working, reading, sleeping or going to the maid café and never see them again.

There’s one area that I haven’t talked about yet: the forest. It’s infested with ‘shadow monsters’ that are being battled by Mystica, the local neighborhood magical girl. She tells Ryou to stay away, but then he develops magical girl powers of his own and he starts fighting the shadow monsters in RPG-style random encounters. What does this have to do with anything?

Fading Hearts seems to have a hard time deciding what it wants to be.

Keep telling yourself that

The writing has some problems with awkwardly worded sentences and stiff/unnatural sounding dialogue. That, and the story is loaded with wish fulfillment crap. Ryou is a rock star programmer surrounded by attractive women. The story starts with Rina throwing herself at him, and continues with Ryou developing magical powers and fighting evil. I can’t wait for the sequel where Ryou develops a cure for cancer and single-handedly saves the universe from 4th-dimensional gods.

There’s no manual, most things you’ll have to find out through trial and error. The core concepts are explained a few days into the game, either by some spontaneous 4 line blurb or by talking to a classmate who acts like an oracle of knowledge.

The menu system is a nightmare. The standard "what to do" menu is like 4 sub levels deep and consists solely of standard unstyled buttons. There’s no distinction between day-ending actions, free actions or even sub menus. Selecting certain options (like buying an item) tosses you back to the root of the menu. Oh, and the status screen button turns into a "you have unread emails" indicator, but pressing it still leads to the status screen where you can’t actually read your emails. When you finally do get to the email screen, there’s no visual distinction between read and unread messages.

The RPG stuff is shit and it’s completely disconnected from the rest of the game. The mechanics are unexplained and strange. You start with 2 actions per turn, but levelling up quickly increases that to three and then four. Was it really necessary to force me to click the attack button four times per turn?

Random battles are triggered by going into the forest. You can fight an unlimited number of battles at a time, just hammer the explore button over and over again. It only triggers a monster encounter about half the time though, just as often you get a "nothing there" screen. This serves absolutely no purpose other than wasting your time and forcing you to press the damn button again.

The sprites are quite pretty (except the shadow monsters, those look terrible). They have different poses, but only the arm positions change — the dramatic skirt positions for the school uniform sprites make this really apparent. The backgrounds are pretty decent, but they’re clearly drawn in two different art styles. No event CG (in the demo at least).

The music is nothing special. The tracks are pretty short, all between 1:30 and 2:00 long. One specific track gets overplayed to hell and back. It’s used as the default music for almost everything. The best part is when it fades out and a new scene begins… which uses that same song again. That happens a lot.

Most of the menu system looks like a standard visual novel choice screen. Where necessary, things are grouped into boxes or lists, but little effort seems to have been put into trying to make it look appealing. The rainbow-colored text box looks kind of bad compared to the sprites.

The biggest problem with Fading Hearts is that it can’t decide what it wants to be. It’s a mash up of two or three game concepts, but probably as a result of having to split development resources, none of the component parts are deep or interesting enough by themselves.