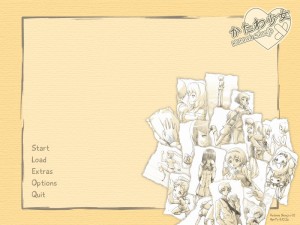 genre slice of life
creator Four Leaf Studios
website http://katawa-shoujo.com/
summary Teenage boy is diagnosed with a heart condition, is sent to school for the disabled.

I’m reviewing Katawa Shoujo a mere seven months after it came out. It’s the behemoth of OELVN — an entity so massive that smaller, similar projects can stay in its orbit and with an atmosphere seemingly able to sustain life for months, years even. It could well be that Katawa Shoujo by itself spawns more discussion than all its peers combined. In a way, reviewing it is largely redundant — there are so many others that have reviewed it, and anyone that cared will have read the damn thing already — but for completion’s sake…

The basic premise is as follows: Hisao, an average teenager is confessed to by a girl and the stress gives him a heart attack. He’s diagnosed with heart arrhythmia and after spending several months in the hospital under close observation, is sent to the Yamaku institute; a school for the disabled.

The story is split into four acts for each of the character routes. In act 1, Hisao arrives at Yamaku and settles into his new life. He spends the first few days conveniently running into the various love interests. Act 1 culminates in the school festival, at which your ‘date’ determines your route for the rest of te story.

Unless of course, Hisao isn’t close to any of the girls. In that case, jam-jarred anti-feminist comic relief male friend character Kenji is your companion for the day (bad end). Kenji’s insane antics are amusing enough for the duration of act 1, but by the third playthrough or so his insanity really started getting stale and I found myself to skip any scenes he was in.

The routes for act 2 onwards differ greatly in tone and quality. That makes it very hard to say things about the VN as a whole. Therefore I’m explicitly splitting up the review into parts for each route separately followed by a discussion of the overarching themes and some general remarks.

Shizune’s route is very, very boring. Student council work isn’t particularly exciting, and neither is off-screen carpentry (the student council is somehow responsible for making festival stands). There’s at least some change of pace when Hisao is invited to Shizune’s house, but meeting her father is just another disappointment. He basically acts like a cartoon character, always carrying a sword and refusing to learn sign language (dad of the year award).

Then, Misha cuts off her drills (why would you do that) and awkwardly tries to seduce Hisao (not happenin’ without the drills, hun). She fails, eventually finds something better to do, the end. Shizune is a bystander for the only dramatic part in her own route.

Her handicap is more mental than physical. The extensive burn scars that cover large parts of her body are certainly no joke, but for Hanako the real problem lies in interacting with other people. She acts like a scared kitten in the presence of others, often going so far as to run away. The only person she seems comfortable around is Lilly; the blind girl.

Hanako usually acts like a frightened kitten. Whether her childish behavior is cute or annoying depends on the reader — I didn’t have a problem with it, but I can imagine others having a different view. During Hanako’s route, you spend almost as much time with Lilly as you do with her. Lilly leaves on a trip to Scotland after Hanako’s birthday, leaving Hisao to deal with Hanako’s yearly withdrawal (she barely comes out of her room for days). Don’t do anything, she’ll just get over it herself…

Lilly spends her afternoons drinking tea in an empty classroom. Elegant is probably the best way to describe her. She’s the daughter of a wealthy family, and knows how to act the part. Going shopping with her during act 1 (and linking arms) was a cute scene.

Events mirror those of Hanako’s route, but Lilly leaves for Scotland earlier (she’s away during Hanako’s birthday). This somehow makes Hanako’s yearly withdrawal less severe. The rest of the route plays out as a sweet teenage romance between Lilly and Hisao.

The dramatic climax is when Lilly is summoned by her family to move back to Scotland. It’s eventually resolved by Lilly just refusing to go — she could’ve just done that from the start…

As a member of the art club, Rin loves to paint (with her feet, she’s missing most of her arms). Calling her eccentric feels like too mild a term for how incomprehensible she sometimes talks and acts. During act 1, Hisao helps her with a mural she’s painting for the school festival. After it’s finished, he decides to join the art club.

The art teacher wants to exhibit Rin’s art at a nearby art gallery. She eventually consents and temporarily drops out of school to work on her art. Gradually, Rin falls into a kind of existential dilemma and starts doubting everything she does. Hisao is reduced to a spectator as she slowly falls apart. Rin grows as a character, Hisao doesn’t.

Track girl, likes to run. Lost her lower legs in a traffic accident. Becomes morning running buddies with Hisao when he decides to improve his physical fitness (to avoid dying).

Emi gets nightmares and has commitment issues, goes crazy when her father’s mentioned. Hisao is a retard for not noticing her father is dead until they’re at the graveyard. Emi’s route feels very paint-by-numbers, as if the devs didn’t really care. The buttsex in the shed scene further solidifies the feeling they weren’t taking Emi’s route seriously.

The overarching theme for all routes is "no Hisao, you’re the cripple". The girls have gotten over their disabilities years ago, it’s Hisao who hasn’t come to terms with his own situation. An event that symbolizes Hisao’s lingering attachments, and one that occurs in each route, is a letter from Iwanako (the girl that ’caused’ Hisao’s heart attack). It forces him to reflect on what his life used to be, and what it’s like now. I just wish it wasn’t the same in every route.

At around twenty hours in length, Katawa Shoujo is much longer than other freeware VNs. Even commercial OEL titles seem to top off at around six hours. There isn’t too much padding, but it does falls into the slice-of-life trap occasionally — everyday events aren’t interesting enough to carry the story alone, there needs to be some type of conflict or it just becomes dull. Especially the first two acts are rather uneventful.

Backgrounds are filtered photographs. They look clean and I never felt the backgrounds were a mismatch for their intended location. The only time a photo felt wrong was in Emi’s room, the photo is taken at a downwards angle that doesn’t work with how the sprites are drawn.

The main girls have a number of poses and expressions comparable to that of commercial titles. There are some inconsistencies in the art style (especially shading) for the main characters. This becomes more pronounced for the side characters who are drawn at a noticeably lower level of quality than the main cast.

The event CG fluctuate in quality even more than the sprites. They’re clearly drawn by different people, even within the same route. For a free VN, there are an awful lot of event graphics — around ten or so for each route. Variations of CGs with different expressions are also used. Pan/zoom effects and/or layers are used on most event CG which helps keep them interesting to look at for a bit longer.

Each act 2 starts with a short, but fully animated, video — a different one for each route. They’re well made, but placing them at the beginning of the story is a dubious move as they contain spoilers for the rest of the route; Shizune’s video especially.

I didn’t love any particular music track, but as a whole the soundtrack was good. The story rarely delves into dramatics and the soundtrack is matchingly restrained.

Katawa Shoujo is a good VN, but with boring parts — especially the Shizune and Emi routes. The central conflicts of each route have a tendency to resolve themselves without much interference from Hisao, leaving the reader feeling like a passive observer.