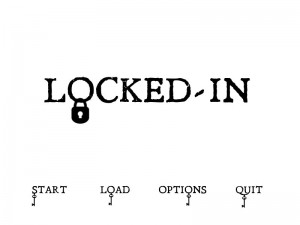 Driving through the pouring rain at night, raving drunk and not wearing a seat belt, Jacqueline Brown’s car accident almost seems inevitable in hindsight. Reaching for her ringing phone was simply one step too far. The arrogance shown through her actions is a good reflection of her personality, that of a merciless workaholic business woman.

The accident leaves her with Locked-in syndrome: a paralysis of (nearly) all voluntary muscle movement. Everyone believes she’s in a coma, while in fact she’s fully conscious and aware of the conversations around her.

Through these conversations she learns that Brenda, her lawyer and confidante, died on the night of the accident. The police thinks it’s a suicide, but Jacqueline suspects foul play. The two prime suspects are Kimber, her personal assistant whom she recently fired for embezzlement, and Delilah, her soon to be ex-wife. A third important character is Sasha, Jacqueline’s younger sister who doesn’t appear to be connected to the murder. Now, Jacqueline must try to find out what really happened without being able to move or talk.

The story is divided into several chapters, each starting with a dumb looking dictionary definition screen. That stopped being clever a long time ago, now it’s just a tired cliché. The words defined act as chapter titles of sort, the definitions are pretty pointless for such commonly used words/meanings.

The eventual ending is determined by who Jacqueline lets know she’s not a vegetable: Kimber, Delilah and/or Sasha. Letting the nursing staff know isn’t an option for some reason. Every possible combination of contacting or not contacting each of the three possible characters leads to a different ending (for 23 = 8 endings total). The endings feel somewhat arbitrarily matched with the choices — there’s not a sense of "clearly, these events are a logical result of telling Kimber and Delilah but not Sasha".

The endings explain some things not in the main story: Dr. Nolan hates Jacqueline’s guts and wants to snatch Delilah away from her, not stopping at severe physical harm. It actually fills a plot hole — how no-one noticed Jacqueline’s very un-comatose brain activity. Still, I would have liked be informed a bit sooner as it seems to come at no surprise to Jacqueline.. You need to combine information from several endings to get the full picture, but it doesn’t add up to an elaborately pieced together puzzle — either a lot of people were very close to killing Jacqueline, or your choices alter reality. Someone tries to kill/paralyze you in most endings, but it’s not always the same person. Brenda’s death, the core mystery of the story, is never convincingly solved and is nearly forgotten about by the end.

Presentation is where Locked-In shines. Not for the sprite or background art though; sprites are static silhouettes and backgrounds minimalist landscapes and stylized rooms making heavy use of tiled patterns. It’s the clever use of animation that makes the most of the limited artwork.

There are little bits of movement everywhere, from slowly moving clouds and rainfall to ice cubes dropping into a glass. Nursing staff is sometimes represented as fluttering birds. The visuals are supposed to match Jacqueline’s perspective, and the symbolism is a consequence of not being able to see.

The majority of the time you’ll be listening to some Kevin MacLeod music, some of which you may have heard in a VN before. Some (vocal) Édith Piaf music is used for the intro/outro and a scene or two in the middle.

There’s little payoff for the mystery and intrigue of the set-up, the story just kind of ends with a fizzle. The animations are good, I would like to see what can be done with less harsh art constraints.