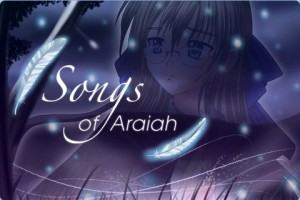 An enhanced, commercial port of Songs of Araiah for iOS/Mac/Web. It uses an HTML5-based engine for all platforms. The web browser version is ‘streamed’ from vNovel’s website (more on this further on).

Unchanged from the freeware release.

As mentioned above, the for-pay version of Songs of Araiah ditches Ren’Py in favor of a proprietary HTML5-based engine. This custom engine makes the iOS port possible (Ren’Py doesn’t currently support that platform). Seeing as I don’t own any Apple hardware — and an Android port is not available — I’m limited to reviewing the browser version.

When first visiting the Songs of Araiah demo page, loading will take a while as the engine immediately downloads every single image in the entire VN — even those images not found in the demo. Music is streamed at least, but I had some problems in the beginning with music suddenly stopping after a few seconds.

The visual novel sits inside a tiny 480×320 rectangle within the website. There’s no higher resolution version, nor a full screen button. The best you get is a cinema mode which does nothing to alleviate the problem. 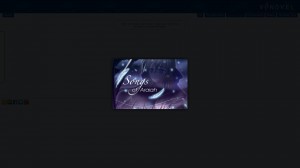 You can artificially increase the size with your browser’s zoom function, but that’s a workaround for a feature that really ought to be built-in.

A full screen function isn’t the only thing missing. In fact, there are no settings whatsoever. Text fades in an entire screen at a time (and you have to wait for the fade to complete before it allows you to continue). Saving is automatic, which isn’t that big a deal for a kinetic novel, but I shudder at the thought of having to read something heavily branching with this engine. No skip mode or text log either.

Only the backgrounds inside the mansion have been upgraded. They look really nice, but the benefit is greatly diminished by the puny 480×320 resolution. That resolution is also a different aspect ratio from the original which causes some images to be cropped. The freeware version actually looks better due to its superior resolution.

The forced slow text during the intro was fixed… by not supporting slow text in the engine. The blurry zoomed-in Melissa sprite was replaced by a better-looking version (perhaps only possible due to the lowered resolution). A casualty of the port was the opening movie which has been removed (from the demo version at least). No image gallery anymore either.

The free version is superior. Buy it if you think the dev is a cool dude or if you really want to read it on your iPhone, otherwise I’d stick to the free version.