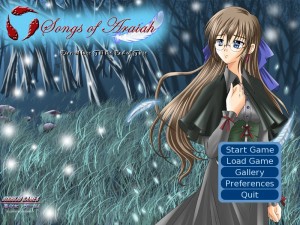 On the morning of his 17th birthday, Jason runs away from home. This in order to avoid the Faith Brandishing Ritual he would otherwise have to undergo: pledge loyalty to some god and get a tattoo. He must really care for his skin, or I guess not, since refusing to take the ritual carries the death penalty. He decides to bet his life on the remote possibility of getting help from a rumored vampire girl living nearby.

Luckily for him, the rumored vampire girl (Melissa) really exists and she offers him a deal: eternal life for eternal servitude. He takes the trade and becomes immortal, at the cost of becoming the girl’s servant.

This is where the VN turns in Housework Simulator 2008. We get to experience it all: cooking breakfast, dusting, vacuuming. You really get the full package here, with a scene about cleaning the basement and one about cleaning the attic. Words can hardly convey my excitement.

There are two stupid running gags that keep popping up during these slice-of-life segments. One, Melissa is very sensitive about her age (187, but she’s immortal and stopped aging at 17). Two, Melissa is a terrible cook. How in the blazes do you not learn to cook after living alone in a house, stocked with multiple cookbooks, for one hundred and seventy years. Otherwise, she acts like a textbook tsundere.

I shall sing you the song (infodump) of my people

It’s not all housework for the rest of the VN, just most of it. Between chores are regular info dumps explaining the fantasy setting and the rules of its magic system. There’s little reason to care about the outside world; Jason never leaves the mansion (he’d lose his immortality), and no-one from the outside world tries to come in. The world -building merely serves as flavor to a story that goes nowhere.

Flashbacks show scenes from the outside world and provide motivation for Jason’s actions. Except of course that as events unfold, Jason’s behavior seems progressively less reasonable. His friend was hanged three years ago for rejecting the ritual, after asking Melissa for help. Why would Jason imitate a strategy proven not to work?

Upon launching the VN, you’re greeted by an opening video. It’s exactly like every other freeware visual novel opening, except all the effects are very, very slow paced. The intro scene continues the slowness with some lines where the text speed is fixed to very slow.

Melissa has lots of sprites — she’d better, she’s practically the only character. Some of the pose changes aren’t aligned properly, causing some unintended movement jitter. In a scene near the beginning of the VN, a pixelated, zoomed in version of Melissa’s sprite is used. Backgrounds are simplistic and colored with excessive use of gradient paint, but the quality is consistent and they serve their purpose just fine.

Nice ‘glass’ you have there

Songs of Araiah has lots of event CG, especially for a freeware title. The quality is pretty consistent with the sprites and backgrounds too, it really gives the VN a sense of polish. The flashbacks are told almost entirely through event graphics, making it stand out from the regular grind.

The music is ⅔ Kevin MacLeod, ⅓ TAM music factory. The sound quality is pretty bad for the Kevin MacLeod stuff: 128kb/s (constant bitrate) MP3, but somehow, the other music is even worse: 22KHz 56kb/s. It sounds very cheap and is clearly noticeable even through $5 earphones.

I’m not sure why this is so well-liked; the production values are very high for a freeware VN, but the story reads like a bad imitation of the boring parts of Fate/Stay Night. The story never goes anywhere and the characters or setting aren’t interesting enough to compensate.

One thought on “[review] Songs of Araiah”