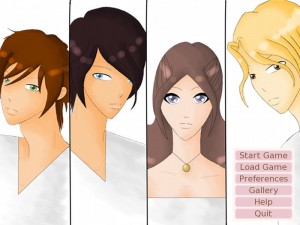 Sayuri returns to her hometown after living at a boarding school for years. She was sent there after her parents died in a car crash, but doesn’t remember much about the accident (she was at the scene as well) other than a vague dream of walking along a road with a boy. Now she’s coming back to her hometown, living by herself in a small apartment and enrolling in the local high school.

The A stands for Alvin?

Her next door neighbor is Adrian, a childhood friend, who also lives by himself for some reason (I don’t think it’s ever explained). The second love interest is Koby, who likes playing soccer in the park. Finally there’s Ren who likes hanging around his former primary school and not speaking.

There are quite a few typos in the writing; ones that would be hard to miss during proofreading. A number of sentences are also missing a period at the end and sometimes the response to a choice doesn’t quite fit with the selection you made. It makes the game feel sloppily made and/or untested.

The story is divided into 30 days, which is way too much for its length (around 15k words/1 hour). This causes ‘events’ to be incredibly short, often reduced to only a couple of lines. It’s like playing with the skip mode turned on. Of course, 30 days of very long events would be torturously dull, but a shopping trip reduced to a 5 line summary is practically useless. Less, but meaningful events are much more enjoyable to read — why couldn’t we just skip a few days every now and then?

In a way, it reminds me of X-note. They both adhere to a pointlessly strict day to day format, to the detriment of the storytelling. Bizarrely, a ridiculous my-necklace-is-actually-a-locket plot point is also something that the two titles have in common. In Synchronicity, it contains a family photo which jolts Sayuri’s memory somewhat.

Because you need clothes?

Each day ends with a stat raising choice (3 stats to grind) that’s almost completely superfluous. The stats influence nothing other than the ending variant and even then, the stats have a 1-to-1 mapping with the boys. Only for the best ending do you even need to care about the other stats — unfortunately those endings are near-impossible to get (you need to get 100% of the possible affection points and exactly match a specific split in stat points). Speaking of impossible endings, there’s a bug in the script that makes it impossible to reach the 2nd Adrian end.

There are 9 endings total (3×3), but they’re all kinda same-y. While walking along the world’s most dangerous road (the one where her parents had the accident), Sayuri is almost hit by a car but saved by her favored gentleman. In variant 1 he’s hit by the car and falls into a coma, ending 2 he’s fine — happy end. The "unreachable without a walkthrough" ending expands on the good ending with a few lines and one or two CGs..

The titlescreen is blurry. I don’t know why, but it is.

The far apart, pupil-less eyes gives the sprites a glazed-over look. The boys’ eyes are ridiculously wide and their chins impossibly tapered. Line-art for the sprites is pencil-sketched — matchingly sloppy compared to the rest of the VN, but that was probably not the intention. Sprites have two outfits each and several expressions, but only one pose.

Filtered photographs are used for the backgrounds. Some have issues with the relative position of the horizon and quite a few photos have a noticeable upwards/downwards angle to them (makes the sprites look wrong).

Compensating for the lackluster single pose per sprite, there’s an unusually high number of event graphics — a whopping 12 per romanceable character. They’re all rather simplistic (and the backgrounds are all solid colors or recycled photos), but there’s a shitload of them.

Music consists of four ripped K-pop songs, two of which are alternated for the bulk of the game. It gets old… fast. There are no sound effects, even though a knocking sound effect was clearly needed in at least two occasions. Instead, the sound is clumsily described in text.

The textbox decoration at the right side makes overlapping text hard to read (purple on purple). The rest of the interface is fairly stock Ren’Py. Your in-game stats can only be accessed by a button from the start-of-day screen. Pressing this button pops up some ugly undecorated text squished at the top of the screen on top of a background consisting of rainbow puke.

It’s a very dating-sim style visual novel, but the entire stats system seems thrown in there without thought for why you would want or need one. An almost absurdly high number of days and over-summarized events make for a rather flavorless story.