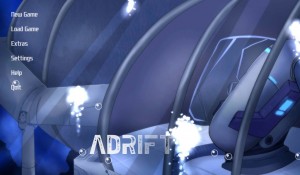 Bluetide, an undersea utopia, controlled by the subconscious thoughts of a human supervisor kept in a sensory deprivation chamber. One day, the supervisor suddenly wakes up, unable to access nearly all subsystems. With only four decrepit robots at his command, he must try to find out what happened and regain his command over the system.

After a short description of the capabilities of each of the robots, you’re thrown into the deep end. Each of the robots can be moved around the map and ‘interact’ at each location. At some point you’ll accidentally stumble upon the right combinations of robots and locations to proceed.

Fumbling around with the robots eventually leads you into one of four possible routes (or a generic bad end). Each route starts with the supervisor recruiting the help of a different girl. My initial impressions of these girls were: suspicious, violently hostile, insane, evil schemer.

Branching in Adrift is a mess. Which ending you get isn’t determined by logical cause and effect, but by the power of flattery. Some events play out differently based on how much you’ve flattered the main girl of your route, even if that makes little sense story-wise. Worse, most bad endings give no indication of what you’ve done wrong. One of the good endings requires a decision so counter-intuitive and hard to find that it’s basically impossible without the guide.

The plot regularly gets bogged down in excessive techno babble. I don’t mind some technical details, but too often the main plot was being postponed in favor of going into unnecessary depth.

Major events and problems stay the same for each of the four routes, only the approach to solving them changes. It makes for a rather dull second, third, etc. playthrough, playing through all the routes, trying to unlock the final ending. One of the four routes actually tells almost the whole story, but the others end with an unsatisfying fizzle, leaving important mysteries unresolved. A final ‘harem’ ending is unlocked after getting every normal/good ending. It’s supposed to tie up some final loose ends, but ends up being pulled straight out of someone’s ass.

I would have liked Adrift a lot better if the branching made more sense and it wasn’t so pointlessly hard. Four, roughly similar routes are too much, especially with three endings for each one. The final ending forces you to play through the whole thing, with a promise of some resolution on which it doesn’t deliver.

The backgrounds are passable, functional but not particularly pleasant to look at. Sprites are a bit better, though as is often the case they have only one pose. The robots look kinda shitty and their shading doesn’t match the rest of the artwork. Each route ends with an event CG of about the same quality level as the sprites.

Music, though stock, is quite nice. The opening credits are accompanied by a voice explaining the basic concept of Bluetide. Subtitles are unfortunately lacking for this part.

The choices are often multiline and centered, an unholy combination of awful. If you write the explanations into the dialogue before the choice, it avoids having to write a short novel inside each choice button.

The beginning is frustrating (lack of explanation), so is the middle (opaque winning conditions) and the end (anticlimactic, explanation weak). The writing is otherwise pretty decent, though with a tendency to get sidetracked in technical explanations. By the second or third route, there are few surprises left and reading becomes a chore.