Don't take it personally, babe, it just ain't your story 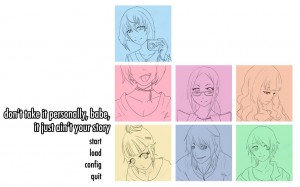 The horrifically-named Don’t take it personally, babe, it just ain’t your story was originally released for NaNoRenO 2011. It was created as a spiritual sequel to the well-received Digital: A Love Story.

We follow the daily life of John Rook. Middle-aged and twice-divorced, he decides to take up a new job as high school English teacher. It’s the year 2027 and computers have entered the classroom in a big way, every student has a personal computer and they’re all constantly messaging each other during class. Possibly because of this, they keep using net-speak in real life which I find incredibly annoying. The desire to toss certain students into a pit of mangy bears was a constant accompaniment throughout the VN.

Rook has been given access to his students’ messages, including ones made outside school hours in order to ‘prevent bullying’. His instructions are to tell this to no-one. Is the school doing it in secret, hidden even from the parents? Why would they take such a huge risk? When you read the ending, spying is apparently not a big deal anymore in 2027. Then why keep it a secret?!

An icon in the upper right indicates the number of unread messages. There’s a continuous torrent of new messages, often a new message for every line of dialogue. Every new message makes an annoying sound which can’t be turned off separately. It’s hard to explain just how ridiculously annoying it is to have a buzzer go off every few seconds while trying to read some text. I’ve added an augmented mode to the review to simulate the true DTIPBIJAYS experience.

You are, of course, forced to read every message. At some points the VN simply refuses to proceed until you’ve read (or at least pretended to) every single message. Even if it didn’t explicitly force you, important plot points are hidden within the forest of inane pretend net-lingo blabberings from Rook’s students.

New messages stream in far too often to be able to read them as they arrive, but when you try to read them in bulk it sends you on a scenic trip, jumping criss-cross between a dozen in-progress threads. And after reading all those, there are still 12-channel (bizarro 4chan) threads to read (forced).

Unlike Digital and Analogue, most of the plot in DTIPBIJAYS is told through normal narrative. The VN is divided into 7 short chapters, with some events changing based on choices made, but no explicit or separate routes. The first major event is when a student (Arianna) tries to seduce Rook. His internal monologue makes him seem more than a little tempted — the logical consequence: 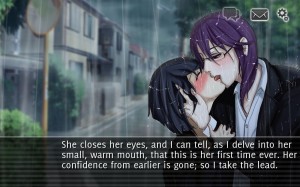 Over the course of the story Rook gets involved in a bunch of teenage drama. Apparently the substitute English teacher is seen by the class as some kind of love magician, because pretty much every single student comes to him at some point for love advice. Also, either this class is an entirely unrepresentative sample or in the next 15 years being gay or bisexual will suddenly become the norm.

You might think Rook’s illicit relationship with a student forms the core of the story. Nope. It’s actually barely brought up and the entire thing has zero consequences. It’s not the only important plot point that’s quickly forgotten. When student goes missing after leaving a "goodbye cruel world" message — oh well, too bad. Both are referenced at the end, but more in an "oh yeah, there was that thing that happened" kind of way. And the ‘suicide’ turns out to be a practical joke. ha, ha.

The ending is a well-aimed crotch punch. It’s a ham-fisted moralistic message and makes no sense unless both Rook and the principal are completely ignorant of the changed cultural norms of the era.

The user interface is a nightmare. It looks nice, but is hard to navigate and thin grey text often blends annoyingly into the semi-transparent background. 12 channel threads can’t be scrolled for some reason, you need to hammer a ‘next’ button. Pressing escape brings up a ‘Do you want to quit’ screen where the ‘main menu’ button tosses you straight to the title screen without warning instead of the main menu screen as you might expect.

The sound track primarily consists of 30 second ambient music loops. There’s the occasional hiccup at the loop point, and the songs themselves can get quite repetitive, especially when slugging through a 50-message backlog.

Most of the images are stock art with the exception of the interface and event graphics. It’s a NaNoRenO title, stock art is to be expected. 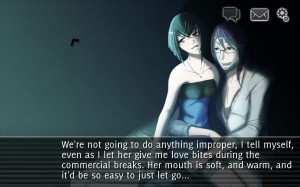 In the next line he starts talking about his dick 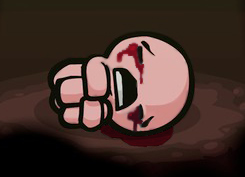 Don’t take it personally, babe, it just ain’t that good.

5 thoughts on “[review] Don’t take it personally, babe, it just ain’t your story”