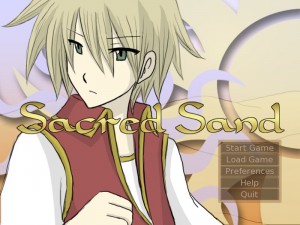 genre fantasy, BL
creator SilverHyena
website http://lemmasoft.renai.us/forums/viewtopic.php?f=11&t=16993
summary A young merchant gets caught up in a conflict with some desert nomads.

Lorr is a young merchant living in a desert outpost of Gradoa. His childhood friend and now a professional soldier, Aydin (or is it Aidyn, the VN can’t decide), arrives in town on an assignment. It’s the first time in two years that he and Lorr meet, so of course Lorr jumps him and snuggles up to his chest.

Yes, Lorr and Aydin are very, very gay. Lorr at least seems completely oblivious to the fact and we’re treated to a nice five minute scene of two grown men blushing at each other. Ah, the wonders of BL where men can look like women and act like innocent maidens.

Gradoa is in conflict with the Shaheron, local desert nomads and Aydin tells Lorr the army is hoping to find the nomads’ hidden desert capital of Ah’Rahel. That night, Lorr wakes up as a thief is rummaging through his wares. He tries to call for help, but the thief knocks him out with a plot-convenient knockout plant. How exactly he’s able to force a shouting, biting guy to swallow a large cylindrical object remains a mystery.

Oh wait, there was a plot in here somewhere. The Shaheron prince was poisoned by Gradoa and Lorr promises to bring back an antidote in return for his freedom. Good to see cause (sick prince) has caught up with effect (kidnapping). Upon returning to the Gradoan outpost, Lorr is taken prisoner and forced to take the soldiers back to Ah’Rahel. They march, on foot, in heavy (heat-conductive) metal armor, through the desert.

About the armor: the soldiers all wear some tube-like breast plate. They wear no armor to protect head, neck or underbelly. The crappy armor actually becomes a plot point: Aydin is slashed through his unprotected side and his commander gets an arrow to the neck. If only they wore functional armor.

The plot collapses like a badly made soufflé poked full of holes. A magical sandstorm spell lasting 10 years has protected and hid the secret city throughout history. Since that would cause every human in there to starve, it also provides magical limitless sources of food and water. And still they’d want to leave their utopia to live as desert nomads. We’re also told why Lorr and Aydin where torn apart during their youth. Aydin was caught kissing Lorr. That elevates Lorr’s obliviousness to Aydin’s advances from serious to preposterous.

Otherwise, the writing has some problems with awkwardly worded sentences and a few particularly hamfisted moments. I never expected to see "long story short" used unironically in a VN to skip over a scene the writer didn’t want to bother with. Later in the story, characters speak in two different languages which leads to a clumsy fourth wall breaking moment when suddenly the writer breaks into the dialogue to directly address the player. Another point of frustration is the ridiculous number of endings — 21.

The music is- there is no fucking music, nor are there any sound effects.

Backgrounds are a mess of inconsistent horizon positions and camera angles. Perspective is all over the place; different objects are drawn from completely different angles. No transition effects are used when backgrounds change, it just instantly flips to the next image. Combined with the whole "no music" thing, some scene transitions can be very sudden.

Sprite art is considerably better. They have a minor case of same-face-syndrome and every male character is bishified — a man appearing to be in his early twenties is worried about his wife leaving him for a younger man (talks like 50, looks like 20).

Even though each sprite has only a single pose (with a few different expressions pasted on top), there are 50+ event CG. Seems like an odd balance to me, why not spend a little more time on the images that are on-screen longer? The event graphics are comparable in detail to the sprites, with recycled or color blob backgrounds. The line-art is quite messy, and occasionally wobbly as if drawn on a mediocre graphics tablet with no smoothing.

Sacred Sand uses the Ren’Py default application icon and text box font. The side image for Lorr pushes the text to the right when visible, changing the position of the first character from one line to the next.

The fantasy setting could be interesting, but the plot has too many basic problems. Lorr acts disturbingly similar to a pure 12 year-old rich girl from the 1800’s.

One thought on “[review] Sacred Sand”