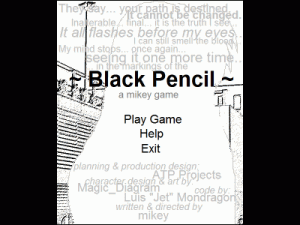 genre romance
creator ATP Projects
website http://atpprojects.wordpress.com/
summary Man has a premonition of an unknown girl dying, drops his entire life to save her.

Public notice: Black Pencil is old as shit — January 2004. For reference, that means it predates the first public release of Ren’Py by half a year.

For the last five years, Kiyoshi has been plagued by recurring precognitive dreams about a young woman dying on January 15th 2006. Unable to ignore them, he travels to the city he’s seen in his dreams and takes a job as janitor in the woman’s building to get close to her. It’s pretty convenient to be able to identify not only the city, but also the office building where she works using precognition. Do premonitions usually show visions of the future deceased going to work? Oh well, convenient supernatural power I guess.

The story is divided into short scenes, spaced weeks/months apart. Over time, the Kiyoshi learns the woman’s name (Yuki) and gradually the two grow closer. The disjointed scenes are necessary to keep the story short and to have a more realistic timeframe for the two to develop some kind of relationship. Skipping forward in time can be a little disorienting however, as you don’t know how much their relationship has progressed in the interval.

Kiyoshi completely forgets to warn Yuki about her imminent death… I find that rather hard to believe. He’s had recurring nightmares for five years and gave up his entire life to work as a janitor on the off chance of being able to help her. Yet now he forgets all about it?

There are a handful of choice points sprinkled throughout the story. These are generally of the form "be nice to Yuki"/"don’t be nice" and add very little to the story. The story itself is mostly linear, the choices determine if you get the A-variant or the B-variant of the current scene. They eventually lead to 5 different endings.

Well, different… not all that much — the endings are roughly the same. There’s a pretty cool twist right at the end of the story, but I did not need to see the same twist multiple times. There’s very little reason to try for the other endings once you find the good end.

The writing is a bit rough. Some of the dialogue between Kiyoshi and and Yuki feels a little unnatural and there are some (small) grammar issues. I also felt that some scenes ended rather abruptly which is more of a problem due to the time skips in-between.

Black Pencil appears to be built in some type of presentation software instead of a proper game engine. You don’t get any fancy features: text speed, save, skip, text log. However you do get two different flavors of full screen mode. One that actually tries to be full screen (bpencil_fs.exe) and one that’s like windowed mode but covers up all other programs behind a giant black rectangle (bpencil.exe). There is no windowed mode.

No keyboard support either, it’s mouse clicks only. You even have to click on the textbox if it exists, inside the background if it doesn’t, otherwise your mouse clicks are ignored. This is especially problematic given Black Pencil’s tendency to pause on completely black screens until the mouse is clicked. The entire screen being black of course doesn’t absolve you from the requirement of clicking only inside the black background within the black margin around the screen.

As you’ve no doubt noticed, this VN is done entirely in gray scale. Backgrounds are photographs pulled through a type of edge detection filter (serving as a poor man’s line-art). The single sprite looks poorly converted to black and white (not gray scale for some reason) with some of the lines disappearing in a speckle. There’s not much to say about the user interface, the text box is just a gray rectangle with some text in it. Text sometimes flows outside the textbox which looks a little sloppy.

Black Pencil is yet another VN with no music. At least it has the excuse of being old.

Buried under a layer of grime — old age, minimalist presentation and sometimes dubious sentence construction — Black Pencil’s core idea still holds up pretty well today. Some of the details could’ve been worked out better and the branching doesn’t add anything to the story.