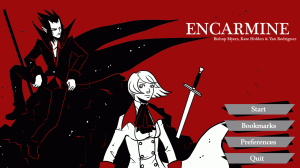 And then suddenly out of nowhere, a new commercial release. The for-pay release of Encarmine is a more polished version of the Ludum Dare 24 version expanded with a second route. It’s only $5, but let’s see how it stacks up against other commercial releases.

Upon starting, you’re immediately presented with a character selection screen: Lucia or Maurus. The first path (Lucia) is corresponds to the Ludum Dare version and is the only path you get in the free demo. The second path (Maurus) shows the events from a different point of view, and branches off after a while when Maurus and Lucia split up. The entire VN took me approximately one hour to finish including note taking for this review (20 min Lucia, 40 min Maurus). 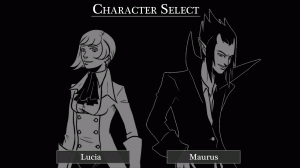 Something which immediately caught my eye was the odd mismatch between writing style and textbox style. The VN is written in an ADV style (name: dialogue), but the textbox is a NVL style fullscreen one. It doesn’t take advantage of the extra space, so there’s really no point.

Both routes start with the same opening scene. Lucia and Maurus are chasing a fiend-possessed man through the snow when they near upon a village. They find the man they were chasing lying wounded on the ground, apparently dumped by the fiend who jumped to a new target. Lucia carries the possibly possessed man to a bed in town to recover when there’s a sudden explosion.

Lucia runs to the source of the noise, drawing her sword. She finds Maurus staring down a family of three, standing near several burning buildings: husband, wife and daughter. Lucia fights the fiend possessed man, but hesitates to kill him and the fiend escapes. She apparently does this every single time she and Maurus hunt down a fiend. Uhm, why is Maurus partnering with someone worse than useless?

This is the point where the two routes split. Lucia stays in town to fight the fiend and prevent him from making any more victims, while Maurus goes off to chase rumors about a magical binding rod which can seal fiends without killing their host. Wouldn’t swapping roles make a lot more sense? It’s Lucia who’s desperate for a way to fight the fiends without having to kill their hosts…

Lucia stays in town and suddenly the gameplay changes into a super simplistic adventure game. It’s really just a ‘where do you want to go?’ choice followed by some dialogue options at that location. Selected dialogue options don’t disappear even though reselecting them is entirely useless. The order of actions is also unnecessary, you’ll need to select everything anyway. It’s pretend-interactivity, entirely pointless.

After ‘detective’ Lucia does some investigating, she finds the fiend and has to make a final decision: live or die [spoiler].

The intro for Maurus’s path is the same as Lucia’s, only now we get to see his thoughts instead of Lucia’s. Turns out Maurus is kind of an asshole. He’s very condescending to Lucia and basically treats her like an ignorant child, merely humoring her silly theories and beliefs.

When they split, Maurus travels to a nearby town to search for the rod of binding. Upon arriving, he finds a seemingly fiend possessed boy battering an old man. He immediately proceeds to incinerate the boy, which should give you some insight into Maurus’s character. The old man is none too pleased with this and prevents Maurus (who’s now using an invisibility spell) from escaping while the town guards come to arrest the horned incinerator. Just to reiterate: The invisible spell-casting fiend hunter Maurus is captured by a battered old man lying on the ground.

Maurus is thrown into jail, the only other captive is a female bandit/killer. In an exceedingly convenient sequence of events, Maurus and the bandit are forced by their captor to retrieve the rod of binding from an underground temple.

From the moment Maurus is thrown in jail, the gameplay changes to adventure game style as it did in Lucia’s route. It’s slightly more useful (you can actually die this time), but also considerably more tedious. There are several redundant rooms and a ‘check status’ option which gives you a rough indication of your hidden HP stat (knowing your HP doesn’t help you in any way). After finding a two-people-required-to-open secret passage, Maurus and the bandit are faced with a sort of trial (the builders probably watched too many Indiana Jones movies).

The trial consists of each of the two pressing one of two panels (they can’t see the other’s choice). Based on which color panel they each press, something different happens:

Oh look, it’s the prisoner’s dilemma. It’s not much of a puzzle, even if Encarmine treats it as such, and therefore not that interesting when played against a computer ‘opponent’. What’s worse, you have to play four(!) rounds of it. You get the same several pages worth of introduction and result description every round. There really isn’t any reason to change strategy midway so the extra rounds are basically pointless. You can die if you choose the wrong strategy, but it doesn’t lead to anything interesting.

After making his way to the room containing the binding rod, some things happen that make Maurus rethink his stance on immediately killing fiend-possessed humans. He gets possessed by a fiend himself, but he’s saved basically by being cheered up (facing his sins I guess). If that’s all it needs to get rid of the fiend, killing seems a little excessive. It explains Maurus’s strange behavior at the end of Lucia’s route, but otherwise doesn’t expand on Lucia’s ending.

Lucia’s path ends up being the more interesting of the two; Maurus’s transformation doesn’t feel genuine given the cause. He’s not against killing, it just turns out to be unnecessary in this case. The extra length in Maurus’s route is mostly spent on the adventure game segment which, as I’ve mentioned, isn’t all that interesting.

It’s all black and white and screentones. Sprites are used occasionally, but the story is largely told through event graphics. Side characters are never shown and some background images really outstay their welcome. Some scenes conspicuously lack special graphics of any kind, most notably pretty much every action scene. All the action is told through text and sound effects, but the background doesn’t change, there are no sprites and if you’re lucky you get a close-up of someone’s face near the end of the fight.

The characters designs are pretty basic; no coloring or shading and only seven sprite images total divided between three characters. The harsh black shadows help hide dodgy perspective in the backgrounds. The strong contrast also makes the text just slightly harder to read than what’s pleasant.

As mentioned earlier, while there’s barely anything going on visually during the action scenes, sound effects are used well to accentuate the action (sword clashes, etc). The music is also quite good, but very limited: only seven minutes total to cover an hour’s worth of reading. Because the tracks are only a minute long, looping can be quite noticeable.

The textbox covering up the artwork is a strange choice, especially when the text is written in ADV style and sentences rarely span more than a single line.

Encarmine isn’t able to rise above the level of some of the better freeware VNs. The second path adds very little to the story and doesn’t really expand on the ending of the first. The event CG heavy presentation falls apart when the budget runs out and fight scenes are forced to occur off-screen.