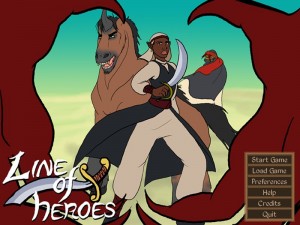 The VN opens with the retelling of a legend. This is one of the most poorly told legends I have ever read, bordering very closely on incomprehensible. Here it is, reworded as I understood it:

There once was a man who wanted to become god-like. To achieve this, he sought to steal some type of key from the three realms (which are never mentioned again). He gathered power (did he actually get the keys or not?) and became djinn-like, changing his name to "King of Thieves" (despite being neither king nor thief). This lead to him threatening some nation for some reason in some way. Which in turn lead to a young hero, backed by some allies, defeating the thief king with some type of ancient magic seals (pulled straight from his ass no doubt). The Triune Goddess (wait, there’s a goddess now?) thanked the hero by making him and his descendants guard the gate to the holy realms for all eternity (what an asshole).

Rama is tired of your shit

We’re told this legend by the main character: Mara, daughter of Arens, the legendary hero. Wha- wha- whaaaat?! As it turns out, the legend was something that happened only 20 years ago. This whole succession of gate-guarding business hasn’t actually happened yet, though Arens is about to officially name his son as successor and go on early retirement from his holy duty.

Then there’s Opal, Mara’s lesbian childhood friend who spends her days stealing from her family in the hopes of getting banished so she won’t be forced to marry… huh? Wouldn’t running away be more effective? And isn’t she more likely to be jailed or have her hands cut off instead of being banished? Opal seems like a throwaway side character, but she actually comes back later in the story.

Everything up till now is completely forgotten as Mara is shipped off to the city in order to attend finishing school and find a husband. The only purpose of this part is to let Mara meet some foreign acquaintances for the coming fetch quest world tour.

Her stay at finishing school is cut short by her father going missing and her brother turning up dead. Greatly worried about her father, Mara quickly rushes home. Her brother’s death conveniently makes her heir and he’s quickly forgotten. She travels the lands with the baby-poop-colored half-djinn Shamir, who’s clearly dangerous. Arens urged his daughter to marry the triple-banished bastard for reasons unfathomable. It gets even more ridiculous when it’s revealed he’s the son of the evil king of thieves.

Now we finally get to the main part of the story. Mara must collect three magic seals from themed dungeons to find her father. It’s all very formulaic and RPG-like. One odd thing is how easily each nation is willing to part with their magical artifact. Shamir was banished thrice for trying to steal each of them (not a very good thief, is he). Allowing the heir of Arens to take the seal makes some sense, but when she’s traveling alone with a dangerous wizard who tried to take the seals before…

Things happen and Mara must revisit every nation again on some stupid treasure hunt — complete with cryptic hints on where to go next — to find yet another magical doodad.

The ending makes about as much sense as the beginning. There’s an epic tweest at the end when Opal turns out to be the big bad, trying to summon an evil god-like wizard into the world. Her motivation: kill everyone in the world for pressuring her to marry. Seriously, what?! She’s also able to single-handedly defeat every single of Mara’s allies who were gathered at the gate to the magical realm. How a short, fat woman with no magical powers or combat experience manages to do this isn’t explained. The final confrontation suddenly turns the VN into a poorly implemented RPG.

The romance scenes are mostly optional and superfluous to the plot. There are a few cases of BMS (blushing man syndrome), but it’s not as bad as Sacred Sand. Only the epilogue seems to change based on the love interest, traditional branching routes are absent.

Everything related to the legend is terrible. The rest of the plot is much like old-school RPG writing: water seal in the water temple with water people, forest seal in the forest temple with the forest people, etc. The sheer number of magical artifacts collected by Mara starts getting a little silly by the end.

Each magic seal is reached through a first-person dungeon segment. You can skip these parts without penalty by selecting "Back Out" at the entrance. The ‘puzzles’ consist of picking up X scattered items and bringing them to Y, one puzzle per dungeon. Navigation is like first-person RPG games from the 80’s — one room at a time. Disorientation is your biggest enemy when all rooms look the same and there’s no map. Thankfully, they’re all pretty short and simple so it never gets truly frustrating.

The RPG battle at the end of the VN is a different story. You have three attacks that only vary in the amount of damage they do. The battle is won by selecting the attack that does the most damage over and over again, the other attacks serve no purpose. If you do decide to try them out it’s possible to trigger a bug — decreasing the enemy’s HP to zero doesn’t defeat them, even with -1HP they get to counterattack (from the grave I guess). The second phase uses a Pokémon-style elemental triangle (grass > water > fire) that’s never hinted at or explained.

The cast of Line of Heroes is impressively large. Each sprite has multiple expressions, and multiple outfits for most of the main cast. Coloring is very basic with no shading whatsoever and there’s only one pose per sprite. Some of the expressions can be a bit iffy: anger apparently involves growling in this world.

Backgrounds can be divided into two categories. The first consists of blurred low-quality 3D renders. The second, smaller group are low-detail drawn backgrounds with often dodgy perspective. Event graphics are limited to one per ending.

A cursive font is used for some of the descriptive text. Letter spacing is completely messed up for this cursive text. I wonder how something this bad looking made it into the final version.

A text continue indicator exists, but its functionality is impaired by implementation problems. It fades back and forth between fully transparent and fully visible, but starts completely transparent. This means it’s not very useful in indicating quickly when the text has fully appeared. The indicator doesn’t appear at all when the next line of text is to be added to the currently visible text instead of appearing on a new page.

Line of Heroes has a fairly extensive soundtrack. It’s also properly credited for once: per track, instead of music by <list of people>. What’s strange about the music is how some scenes are suddenly silent for no apparent reason. There’s also a tiny bit of voice acting, but only for three or four random sighs throughout the VN — it’s really jarring.

The fantastical elements make little to no sense, as do the motivations of the bad guys. There’s a bit too much padding between the loony parts to really enjoy Line of Heroes for its B-movie appeal.

One thought on “[review] Line of Heroes”