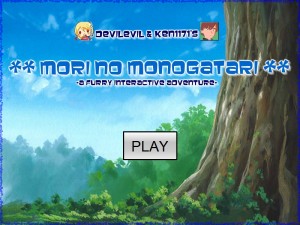 Created as a silly side project, Mori no Monogatari ends up being a remarkably good example of what not to do in a short VN.

Let’s first get this out of the way: the furry shit. I blame deviantart for normalizing the sexualization of freaky animal people. Perving over a bunny girl’s underwear is a major plot point in this. I guess that’s what happens when you let a pack of cooky kids percolate on the unfiltered internet unsupervised. 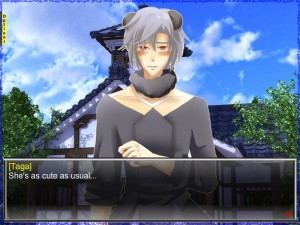 This… creature is apparently male

The bear and the maiden fair

This is the tale
of a bunny girl fair
with hot on her tail
a large black boy bear.

The girl’s on a quest;
bringing lunch to her nan.
The bear does his best,
protects if he can.

A wolf’s on the prowl
threat’ning the lass.
That stalker bear’s scowl
scares off his ass.

Meanwhile her brother
is blowing a gasket.
It seems that his sister
did not take her basket.

Her brother seems nice,
the basket he’ll bear.
However his price
is the girl’s underwear.

Lusting for panties
is a kinda perverse.
The wolf is a dick
but her brother is worse.

At its heart, Mori no Monogatari is a gentle story about a bear lusting after an underage bunny girl. Mister bear is also wearing what appears to be a dress. The story is a little red riding hood parody — bunny girl is bringing food to her sick grandma, going through the wolf-infested woods.

So far, so mediocre, but aside from the furry nonsense not truly awful. There’s just this one little thing about the branching…

Make a list of everything you could possibly do wrong with regards to branching and this VN probably does it. Extremely long choice descriptions, nonsensical consequences and a shit-ton of bad ends. It even gets the choices wrong in a new and undiscovered way — you’re expected to make choices for a number of different characters and it’s sometimes unclear which character the choice is for. The choice tree is also very deep for a VN without rollback or a save function. Really, the only sane way to read this thing is by systematically following every branch in order and keeping notes. No save function, a million bad ends and a trillion choices — that’s terrible. 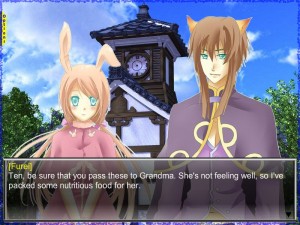 White outlines around the sprites: yech. Backgrounds and music are stock and of pretty decent quality. There are event CG, but you’re unlikely to see them. You’re much more likely to have thrown yourself from a bridge out of frustration from all the random bad ends and lack of a save function.

The central theme of the custom Flash engine is things not working properly. The options tab opens with a glitched animation, text rewraps as it appears and the hotkeys make no sense. Speaking of hotkeys, you’ll only find out what they are by accessing the hidden help menu (press ‘H’).

What doesn’t help is the glitchy keyboard support. The keyboard just plain does not work at the beginning of the game (and again after each choice) until you advance the text using the mouse at least once.

9 thoughts on “[review] Mori no Monogatari”