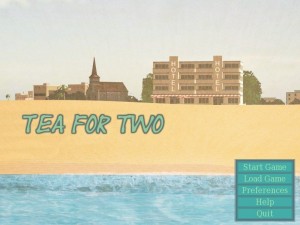 Retired middle-aged man Antoine is infatuated with Marie, a much younger waitress working at a local hotel. He likes to have tea there while his wife thinks he’s at church. Yes he has a wife, and no there aren’t any extenuating circumstances that would lead him to be unfaithful.

The writing during the opening scenes is some of the worst, incomprehensible purple prose I’ve ever seen in a visual novel. Flowery analogues are used without purpose and adjectives are randomly slapped on nouns that don’t need them. Luckily it’s only this bad in the very first part of the VN, but damn, it’s near unreadable.

The plot is jumpstarted when the owner of the hotel Marie works at suddenly dies (from what looks like natural causes). Marie is afraid an investigation will reveal she’s not a legal citizen. Antoine responds by going completely insane and he makes up a crazy story about representing a buyer for the hotel. He then instructs the employees not to talk about the old owner’s death to avoid ‘a scandal’ which would scare off the potential buyer. Some geriatric lady with heart problems dying of natural causes is apparently a scandal. He also prohibits them from calling the police and makes up a ridiculous story about the morgue being full. So they just drag the dead body away and toss her into the large freezer box storing the hotel’s meat supply. Seriously, WTF.

Of course Antoine still has a home life to come back to. His wife invited over a friend and her husband Xavier; the most annoying person in the world. He’s a militant vegan know-it-all who wears shutter shades. Clearly, Tea for Two isn’t going for subtlety here.

Somehow, by the next morning Antoine’s body snatching remains undiscovered. But when he arrives at the hotel there’s a large uproar. Several nearby hotels are getting surprise visits from the health inspection. To make sure they pass the inspection, Antoine and Marie go off to do some last minute cleaning/maintenance. Marie suddenly takes off all her clothes for some thinly veiled fanservice. Sure, your clothes would otherwise get dirty and it’s not as if you’re in a hotel with a large stock of spare uniforms.

The events up until this point haven’t exactly been well… sane, but the ending really turns the crazy up to eleven. Xavier turns out to be the health inspector, but super-vegan is scared off by an angry mob of meat-deprived hotel guests — a dead woman in the meat freezer made serving bacon difficult. But wait, there’s more. Xavier’s assistant is really a government agent investigating Xavier’s secret double life as an environmental terrorist. Antoine’s wife acted as an accomplice — well isn’t that fucking convenient. And then the dead owner’s sister shows up to make Antoine manager of the hotel. The Marie subplot is resolved in a similarly convenient way when she overhears Antoine talking to himself about his love life in front of the frozen corpse.

Tea for Two turned out to be far, far sillier than the ‘poetic’ opening backed by classical music would lead one to believe. Antoine isn’t particularly likeable as a character. He lies and deceives without restraint and for purely selfish reasons. Through some ridiculous turn of events everything turns out preposterously well for him in the end. Although I’m still not sure how he convinced the police with regards to the dead woman in the freezer. How the heck do you accidentally fall lengthwise on your back into a freezer? Oh well.

Yep, this is one of the few visual novels with pre-rendered 3D artwork. In this case using cell-shading which, while not particularly great looking, is much better than the normal shitty lighting. More problematic is the extremely low JPEG quality at which these renders are saved. This shit has more artifacts than a convention on ancient Egypt.

The 3D models themselves are about what you’d expect, generally hovering around early PS2 cutscene quality. There’s just this one little problem which keeps cropping up throughout the entire VN: mouths. Especially Antoine’s wife has a constant and severe case of crumple-chin. Several attempts at making characters look surprised or displeased results in their lips flying away from their skull.

The soundtrack consists of a single ten minute classical music piece. It’s not bad, but one track can’t possibly fit every scene and you end up with a number of cases where the music really doesn’t match what’s on the screen.

Tea for Two makes some good occasional use of NVL mode, placing a vertical image besides the text to serve as the background. The opening scene has annoying fraction-of-a-second pauses on each comma for no good reason. Luckily, this doesn’t last for the whole VN.

Awful writing in the beginning but it gets better later on. The misleadingly serious opening turns into a pretty dumb/silly story rather quickly. Antoine does nothing to deserve his happiness.