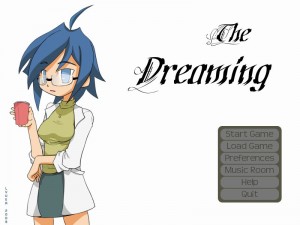 Gabrielle has recently started working at the Robertson Clinic, a renowned psychiatric institution. She thought she was lucky when she got a letter offering her a residency at such a prestigious place, but things haven’t been going as well as she’d hoped. Her colleagues mostly ignore her and the only work she gets to do are menial tasks.

Her lucky break comes when she’s tasked with doing preliminary work on a new admission while the responsible professor is too busy with other work. She has approximately two weeks of time before he returns. The new patient is a man (Julius) in his late twenties who has admitted himself due to his persistent hallucinations.

The first part of the story is pushed along by Gabrielle’s attempts at finding out what in Julius’s past could have caused him to start having these hallucinations. You, the player, are occasionally asked to choose one of several possible treatments. Some knowledge of psychiatry is required to be able to make this type of choice and so the VN dumps a screen or two of condensed information on you every time you need to make a psychiatry-related choice. It comes across as a rather inelegant solution, but it works well enough — the information is clear, relatively short and presented as close as possible to when you need it.

In order to find out more about Julius’s past, Gabrielle contacts his former doctor: Dr. Marshall. According to him, Julius used to work as the head of marketing at a large oncology research corporation. Due to the extremely high workload and constant stress he developed burnout symptoms and decided to see a doctor about it. Dr. Marshall reluctantly prescribed him Prozac which "couldn’t really do any harm". And then the Prozac made Julius unable to achieve an orgasm (a common side-effect), which caused his marriage to fail (what?). He then sued the doctor (for what?), won (how?), and now the doctor has to pay for (part of) the alimony payments from Julius to his ex-wife. Seriously, WTF.

The story goes into its second act when, after a long session with Julius, Gabrielle begins to develop headaches and starts seeing a black fog. Hiding in the fog are monsters similar to the ones described by Julius. She also starts running into people who couldn’t possibly be there, yet she doesn’t really question how or why.

This is a quick time event, you have 5 secs until death.

While the branching in the beginning was fairly arbitrary — just pick some type of treatment and see what happens — once the monsters arrive, it gets incredibly shitty. Holy rule of visual novels: thou shalt not use timed choices. Quick-time events already suck in action games, but to throw them in unannounced into a visual novel is just ridiculous. What’s even worse is that there’s no indication of the time limit, no distinction between timed and non-timed choices and getting the timeout usually kills you. Sometimes there’s barely enough time to read the options and in one occasion every single option leads to your death — letting the (hidden) time limit run out is the only way to survive.

Ignoring the bullshit branching for a moment — the monster designs are pretty cool. Some of them are genuinely creepy and the black fog both obscures the fiends and areas without fog are safe rooms. Wandering around the facility, surrounded by nightmarish creatures, slowly doubting your own sanity is the best part of the VN.

Getting all the endings can be frustrating. Hidden stat checks are sprinkled throughout the story and failing these causes a generic bad end with no indication of what you’ve done wrong. The final (sixth) ending is stupidly hard, virtually impossible to reach without a guide unless you fuck around with the skip key and spend an hour or two trying out every single possible combination of choices.

It’s not even worth it, the final ending tacks on a short scene revealing Gabrielle is also one of Julius’s hallucinations, whoop-tee-fucking-doo. Getting the sixth ending unlocks the epilogue which I didn’t much care for either. It’s told from the perspective of Julius’s comatose daughter as she hears her parents euthanize her. End scene.

It’s hard not to notice the odd mismatch between the style of the sprites and the style of the writing. Julius is supposed to be 28, but he looks more like 10. The serious psychological horror and cutesy sprites simply do not match at all. Supposedly it was an intentional decision because it worked for Higurashi, but Higurashi is moé/horror and not serious-psychiatry/horror. The closest thing you get to non-serious in The Dreaming is a peculiar obsession with Gabrielle’s cleavage (she catches someone staring at her breasts several times).

The art is also unfinished as you can tell from the version number: v0.9. Some sprites and backgrounds are placeholder art. The monster designs are pretty cool, particularly when partially obscured by the black fog. Two of the three are rough pencil sketches, but the lack of definition works surprisingly well.

Can’t say I really enjoyed the music. The ambient music is so slow-paced my brain doesn’t recognize it as music or something. I keep getting distracted every 1-2 seconds when a new note starts. It’s not bad, but for me it did exactly the opposite of what ambient music is supposed to be — unobtrusive.

Text presentation switched between NVL (full screen) and ADV presentation. Annoyingly, the NVL textbox isn’t cleared when switching to/from ADV mode, so when it switched back to NVL mode there’s often still some leftover text from a while ago. The NVL textbox also often fills up completely before starting a new page instead of inserting a page break manually at a more natural point. Sometimes text flows outside the textbox (and the screen, so it cannot be read).

The horror bits are actually pretty good. Hard to avoid bad ends and timed choices feel unfair and can get very frustrating. The true end is brutally hard to reach and unrewarding.

One thought on “[review] The Dreaming”