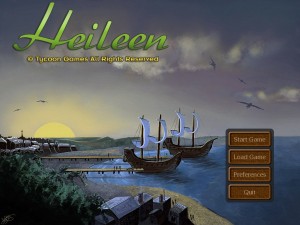 Heileen is an impressionable 18 year-old girl living in the 17th century. Her parents died and now she’s living with her uncle, a famous merchant. Her uncle forces her to go on a trip with him to the new world — America. She’s accompanied on this trip by her childhood friend Marie, who apparently has nothing better to do that year. Also joining them on the trip is her uncle’s mistress, Lora. Heileen doesn’t really know how to deal with the sassy comments of the former prostitute.

The ship is manned primarily by shirtless sailors, or at least those are the ones we’re shown. Shirtless John is Mr. generic, a fairly bland nice guy character. Heileen keeps calling him a womanizer for whatever reason, but he doesn’t really acts like one. Shirtless guy #2, Jack, is a gruff burly man who’s an the ship as an indentured servant. He’s not romanceable and neither is any other male character except John — the other two romantic options are both female. That’s a little strange, especially considering both ‘yuri’ routes are pretty weak: one leads to a best friends ending, the other barely progresses past a hug. I’m not sure who this VN is for…

The majority of the plot concerns daily life on the ship, but it doesn’t really make an attempt at being even almost historically accurate. Realism gets thrown overboard the moment you see Lora’s choice of clothing. Maybe if she’s a time-warped stripper or something I can understand, but I don’t consider her outfit particularly appropriate or even remotely realistic for a transatlantic ship in the 1600’s. Other flubs include a near-unlimited supply of non-spoiling fruit and vegetables and a magical non-religious vegetarian who saves everyone from scurvy by means of her superior dietary habits. There’s also a talking cat who serves no purpose in the story…

No Elias, you’re wearing a shirt — you can’t be a romanceable character.

Going by the sheer number of choices and hints at gameplay (visible ‘score’) you’d think the plot was highly dynamic and branching. It isn’t, certain events turn out differently based on earlier choices, but most of it is linear and only diverges permanently for each of the character-specific epilogues. My first playthrough took me 70-80 minutes, slightly over two hours to clear the whole VN with a significant amount of time spent reading variants on scenes I had already read.

Your score is increased by successfully completing quests given to you throughout the story. Solving as many quests as possible and getting a high score does… absolutely nothing. You get a rank assigned to you at the end, but that’s it. You receive no extra content and no reward of any kind.

The number of choices feels artificially high. While many of the choices end up subtly influencing later events, about half of them only change the following line or two. You can consider it a form of role-playing I guess… At least getting the endings isn’t unreasonably hard — once you figure out which characters are romanceable that is. Lora’s ending requirements are needlessly strict, but the age-old tactic of maximizing your time with her and avoiding everyone else seems to work.

Writing in Heileen isn’t particularly strong. There’s the occasional clumsily worded sentence, but it doesn’t get in the way of the story. A bigger problem is the inconsistent characterization, especially with Marie. She flip-flops between hard gay for Heileen and suddenly straight from one scene to the next. Marie forces herself on Heileen, then acts as if nothing happened. The inconsistencies are partly due to how the VN is structured; romance scenes are added in-between the common-route backbone of the story. It doesn’t explain the conclusion to Marie’s route which is some bullshit best friends forever ending.

The Lora route isn’t much better. She doesn’t even seem like a plausible romance option unless you actively try to get on her good side. The most notable thing in the Lora route is near the end. When they’re shipwrecked and wash up half-dead on an island, a random sailor goes nuts and tries to rape the unconscious-nearly-dead-from-exposure Heileen. Seriously dude, that’s fucked up.

Some attempts are made at delivering the promised adventure and mystery, but it never really pans out. The focus is more on people walking in on Heileen when she’s in her ‘pajamas’ (lingerie) than anything particularly adventurous. Seriously, Heileen gets sexually harrassed a lot. The appeal of the VN is under-dressed attractive people on a ship, not anything related to the plot.

Production values are pretty dire. Art assets are generally kept to a bare minimum, for example the title screen doubles as the background for the harbor. Other backgrounds attempt to hide shit perspective and low detail with rough brush strokes.

At least the sprites are much better. Each sprite has 2-3 expressions with 2-3 costumes as required by the plot. Some expressions are accompanied by small arm movements. Lora is the exception as she’s the only character with a completely different secondary pose (to show off her panty-clad ass). Heileen’s embarrassed expression looks more like she’s being anally violated in a storage shed than embarrassed, but most other expressions are generally appropriate.

Luckily, being adrift for a week had no adverse affects on John’s abs.

Lora is dressed like a pornstar and we keep seeing Heileen in lingerie as people constantly barge into her room before she has a chance to get dressed. Three of the male characters appear to have some severe fabric allergy as they’re never seen wearing a shirt. Even at the end, when they’re shipwrecked, everyone’s clothes are magically replaced by bits of sail held together by pieces of rope. Seriously, it’s only been a week, where have their clothes gone? The bits of sail (where did they get the sail from?) are strategically positioned to show as much skin as possible without going over the age rating.

Sprite animations are used for characters entering/exiting the scene. Many of these look so bad it get kind of funny. Protip: don’t scale character images, it looks ridiculous. I’ve uploaded a half-assed video showing a few examples.

There are no event CG in Heileen which is rather disappointing for a commercial release. Even worse, there’s barely any music either. There are only two music tracks, and those two only play during specific scenes. Most of the time, you’re reading in complete silence.

Heileen looks like a straightforward otome game on a sail ship, but it’s not. While Heileen herself talks about men a lot, there’s only a single male love interest. Excessive sexualization gets in the way of an already weak storyline.