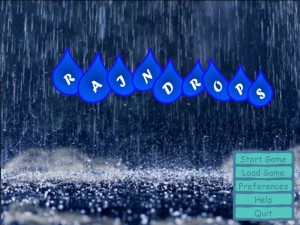 First, a small disclaimer: I read the 1.0 version before it was cool and before its grand artistic vision was corrupted by the plebeian masses demanding such perverse things as readable text.

The dramatic love story comes to a thundering start with a flashback to ten years ago. Lesser writers would feel the need to include story before the flashback, but Raindrops is above such nonsense. Our guide through this imaginative realm of wonder is Tristan, an average young man of high-school going age.

We first encounter the strapping lad on his first day at the prestigious Nimbus Lumen private high-school. He’s greeted at the door by a life-sized blue-haired bobblehead going by the name of Amaya. The appearance of other humans as either black pawns or bobbleheads is clearly a visual metaphor for Tristan’s damaged psyche and view of people as merely nightmarish talking creatures.

His tragic home situation is further expanded upon in a flashback within the flashback. His parents called each other stupid, traumatizing Tristan for life. After the flashbacked flashback finishes flashing back, we flash forward to a different flashback occurring at a later time than the previous flashback.

Tristan and Amaya are trapped inside a cave. This is where Tristan’s mental state starts to become problematic. Even though the cave’s entrance is wide open, he claims they can’t escape due to a light drizzle outside. While they wait several hours for Tristan to regain his sanity, Amaya regales Tristan with the tale of her own abusive parents who are mildly unpleasant to each other near constantly. After confirming their shared misery, they proclaim somewhat above-average friendship to each other, but alas it’s not to be.

Flashing forward from the previous flashback, a tragic twist of fate separates the star-crossed not-quite-lovers. Shockingly, Amaya’s parents are divorcing and her mother is taking her and moving to some far off place. As she’s only in her last year of high school, there’s no way she can refuse!

After an appropriately dramatic seven years, the two finally re-unite and proclaim their love for each other. In the interim, Tristan has created a world-famous company from nothing. Amaya spent seven years abroad doing absolutely fuck-all.

The artistic marvels are on par with the epic story. The barbarians who make of the majority of the visual novel reading public likely won’t even be able to figure out of the image is top-down or side view. Yet in a magnanimous gesture, the visual novel’s creator reaches out to these ogres by labeling certain items like lockers or the school with their names. It even explains how the human-sized blue ellipses are drops of rain deformed by gravity.

Partially legible dramatic text forms a considerable portion of the catalog of backdrops which pass by over the course of the story. In a similar vein, the text box contains a poetic statement oppressed by the limited vertical size of the allotted text area.

The main text doesn’t escape the fuzzy border of incomprehensibility either. For artistic reasons, the white text is displayed without outline or shadow on top of an also white background in a symbolic protest against racial discrimination. The use of comic sans is a rebellious act against the establishment.

Automatic text progression serves to accentuate the fleeting nature of life. Its reluctance to work well with skip or rollback paints a grim picture of what we stand to lose if we recklessly rush through life. By sometimes suddenly not using autocontinue on pieces of similar looking text, the author keeps us continually on edge.

The complete and utter lack of any form of music or sound spurs us to appreciate the melodic hum of our computer fans punctuated by the rhythm of a rattling hard drive.

</sarcasm> — Yeah, it’s shit. But to give credit to the author, s/he did add an outline to the text and fixed a few bugs since I read it.