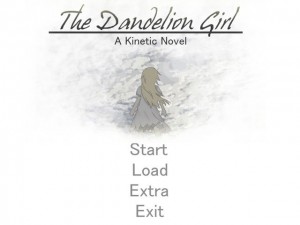 "The day before yesterday I saw a rabbit, and yesterday a deer, and today, you."

The Dandelion Girl (Dandy Girl) is a visual novel adaptation of the short story of the same name. It was cobbled together by a ragtag team of (mostly) anonymous members of 4chan’s /jp/ board in 2009/2010. Most visual novel fans should be at least familiar with the famous line quoted above from its use in Clannad, even if only very few will have read The Dandelion Girl itself.

One day, while hiking through the hills near his vacation cottage, Mark stumbles upon a young woman in a white dress. She introduces herself as Julie and, when asked where she’s from, proudly proclaims to be from the future. Mark doesn’t buy it at first, but could she be telling the truth?

The story primarily revolves around Mark’s interactions with Julie and his growing infatuation with the girl half his age. He’s the perfect age to fall into a midlife crisis and the energetic Julie is exactly what he was secretly longing for. I was pleasantly surprised by Mark feeling guilty over not only the twenty year age gap, but also for ‘betraying’ his wife while she’s away on jury duty. It’s kind of sad I have to be surprised when a romance VN has a protagonist with a conscience.

Of course Mark’s daily meetings with Julie on that field in the hills can’t last — they were always on a time limit imposed by the return of Mark’s wife — but how it ends is unexpected. The way sci-fi elements link into the ending is also pretty interesting. It still functions as a romance even if you ignore the scientific principles, but the way it applies certain theories is quite clever and leads to greater appreciation.

As an adaptation, Dandy Girl stays quite faithful to the source material. Some tweaks had to be made to move the story from 1961 when it was written to the present day. Similarly, some of the language used in the original was changed to make the characters sound more natural. A few anime mannerisms made it in as well, but they don’t get in the way.

Interface-wise, this is a very basic ONScripter VN. It uses an antiquated screen resolution of 640×480 and a mostly stock GUI (it has an extras screen, but that’s about it). The backgrounds are also very plain; they’re just photos with a posterize effect applied to them. Sprite work looks like it took significantly more effort. Although simplistically drawn, Julie has a range of emotions and poses far beyond what you’d expect in a 20-30 minute freeware VN. Julie also goes through several outfits over the course of the story (drawing natural-looking dresses wasn’t the main artist’s forte).

Variation in sprite work is important in communicating emotion, but even more effective are event graphics. For a short VN, Dandy Girl uses a boatload of them: 14 in total (excluding variations). As a shortcut, most event CG are custom sprites drawn into the existing photo backgrounds. Not just in front of the photos, Julie is actually drawn into the landscape on several occasions and it really helps connect the sprites and backgrounds together.

Music stays very much in the background with a soundtrack consisting primarily of soothing piano music. The Kevin MacLeod tracks are recognizable as always and it sorta kinda ripped the titlescreen music directly from Cross†Channel. Occasional sound effects help accentuate the relative quietness of the background music.

You don’t need great artwork or amazing technical marvels if you have a solid story to tell. In the end, that’s what’s most important in a visual novel and Dandelion Girl delivers.

4 thoughts on “[review] The Dandelion Girl”