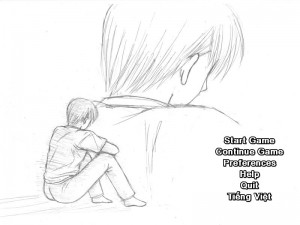 We meet our protagonist, Allen, as he’s enduring the opening ceremony on his first day of high school. He complains in his thoughts about the boring speech and feeling disconnected from his schoolmates. Mostly he’s just butthurt from not having any friends in middle school.

After moving (and changing schools) due to his dad’s work, he had trouble fitting in and making new friends. The others more or less ignored him, preferring their existing friendships over bonding with the new kid. He tried to get along for a little while, but then just gave up trying to talk to anyone for the rest of his time there. What finally made him give up is the realization most of his classmates had known each other for years. I’m not sure why that took him so long to realize or why that would make him give up, but that’s how it is.

High school is a second chance for Allen, but he’s too mopey to notice. Mr. sunshine does his damnedest to avoid making contact with his new classmates, aiming straight for outcast v2.0.

Hi, I’m the only character with a sprite.

In the canonical path, he approaches Cheryl (in the most socially awkward way possible) and she responds positively. Cheryl gains a normal sprite and the world suddenly gains color. The End.

Wait, what — it’s not over yet? But the main conflict has just been resolved. Chapters 3 and 4 really feel like a second story. The main characters are the same, and the events occur following those of chapters 1 and 2 but there’s no clear direction and no conflict until the end of chapter 4.

Not much happens until the end of chapter 4 when there’s a sudden revelation Cheryl is moving away. Depending on the outcome of 2 choices in earlier chapters, Allen either takes it well or he becomes mopey kid v2.0 butthurt edition. There’s a third ending, but it’s a generic bad end much earlier in the story.

I like to complain about Allen’s behavior a lot, but if he’s actually depressed it makes perfect sense. The problem is his reason for becoming a friendless miser isn’t too convincing. Most kids who change schools have a hard time making friends at first, but even if Allen’s new classmates are complete assholes who ignore him entirely, it’s not as if he can’t stay in contact with his old friends. Cheryl’s behavior seems ridiculous at first, reeks of a wish-fulfillment character, but there’s actually a good reason for it her family moves around a lot so she knows how to be pro-active in making friends. The problem is it leaves a bad first impression, until right at the end it seems like it’s just poor writing.

Initially, everything’s black and white but color comes in with friendship at the end of chapter two. Backgrounds are simplistic and angular with some 3D work thrown in here and there. The drawn sprites/backgrounds and the 3D renders actually blend together surprisingly well. They use comparable shading, similar line work and are at a comparable level of detail.

Scene transitions use a fancy custom bitmapped dissolve (good), but always the same one (not so good). Faceless Cheryl is kinda creepy, but when her face warps in on top her empty skull — that’s just freaky. Color coming in later feels like a repeat of the same effect as no-face Cheryl gaining a face, it loses its impact the second time around.

Tying Threads uses a single sprite (Sheryl) with a variety of eyes/mouths. There’s animated blinking and crying, but both look unnatural and very cartoony. With how static and sparse the rest of the artwork is, the sudden animation looks very out of place. Some snow with particularly good dramatic timing starts falling during the end of chapter 4, but it doesn’t look great. The snow flakes all have a uniform size/shape and the movement is very jittery (positions clamped to integers?).

The good ending is an exception in that it suddenly has two event CG — that also show Allen for the first time. He has that all too common birth defect of not having a face (suddenly I know why no-one wanted to be his friend). In general, the amount of graphical polish for the good ending is disproportionate compared to the rest of the VN: animated snow, a camera pan, much more artwork…

Text isn’t displayed inside any form of textbox, instead it’s just displayed on top of the artwork. Thick outlines keep the text readable, though not necessarily pretty looking. When color returns, the grey outlines become deep blue (for Allen) and eye-searingly bright orange for Cheryl. The lack of a textbox isn’t a problem for normal text, but choices also lack any form of visual separation between options and nothing makes them visually distinct from regular text.

Allen’s reasons for being depressed come across as petty, something a little more dramatic would’ve convinced me more. I would’ve liked it better with just the first two chapters, slightly expanded. There’s some minor character development (mostly off-screen) during chapters 3 and 4, but not much going on otherwise. The eventual dramatic climax is also entirely predictable.

One thought on “[review] Tying Threads”