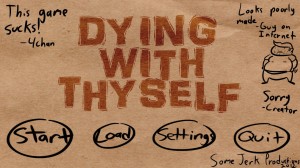 Mark is a typical guy in a typical town starting his junior year in a typical Texas high school. On his way to school he runs into friendless girl Ariane, whom he quickly befriends. Mark’s group of friends is completed by wacky thrift store junkie Doug and sassy girl Sam. A standard slice of life setup so far…

The first chapter is still mostly grounded in realism (with some surrealist gags), but as the chapters continue it gets further and further away from sanity. The cake war chapter serves as a turning point; it starts as a generic slice-of-life high school plot about trying to buy a limited-time food item from the school cafeteria and ends with an elaborate action scene involving helicopters and machine-gunning zombies in an underground corridor. Things never quite go back to normal after that.

Dying With Thyself is structured as series of standalone chapters. There’s some continuity between chapters, but little in the way of an overarching narrative. Chapter lengths (and quality) vary greatly, some chapters might go on for 20+ minutes while others only last for a single gag.

It gets pretty silly.

Primary focus lies on the various types of wacky hijinks Mark and his friends get caught up in. Most of it is deeply steeped in anime tropes (robot maids and such) and some of the later chapters are more random than funny. For example: a single voice acted chapter which seems to serve little purpose other than being voiced, followed by a chapter which consists almost entirely of a single communism joke stretched out way too long. The Touhou chapter in particular relies too heavily on old fandom jokes and references.

An unfortunate property of excessive zaniness is how quickly you get used to it. The crazy becomes common and it loses its effect. This, combined with the episodic nature of the story makes it very easy to get bored (and quit) especially during some of the longer chapters. A stronger overarching plot would’ve given more motivation to struggle past the weaker parts.

Dying With Thyself is best enjoyed in short bursts. Give yourself time to recharge your wackiness tolerance and don’t be afraid to skim boring chapters either, you won’t miss much. Some of the physical humor doesn’t quite work without the event CG to back it up.

Nice looking sprites, but only a single pose each. The sprites look like they were drawn for an 800×600 VN, rather than the 1280×720 used in Dying With Thyself. This makes the characters look rather small and insignificant, especially the female characters who largely disappear behind the text box.

Backgrounds are mediocre photos with a shitty filter applied to them. Quite a few photos don’t match with the sprites at all (wrong angle or zoom level, think car/train scenes in Umineko). Event CG are also missing, but some (simple) special effects partly take their place.

Music is all over the place, continuously shifting between tone and genre. The general theme appears to be ska, though I’m not sure how Russian ska is supposed to match Texas high school life. Several of the background tracks contain vocals which is distracting while trying to read dialogue.

The scribbles-on-paper user interface is certainly a step more creative than the average OELVN, but it leads to a messy and sometimes hard to read layout. In the same style is the main textbox, which looks like a bit of paper with some tape at the sides (taped to your monitor I guess). The font used isn’t particularly pleasant to read for long stretches of text (and suffers from a Ren’Py bug which sometimes cuts off part of the descenders in multiline text). Text speed can’t be changed which annoyed me more than it probably should have.

Not bad, but very uneven. Some chapters feel redundant or go on for too long. Wacky hijinks grow tiresome long before reaching the end and there’s not much of an overarching story to motivate you to continue past the boring parts.

One thought on “[review] Dying With Thyself”